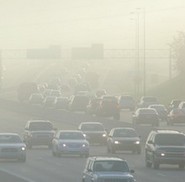 Just a few air pollution facts the Big Three would prefer not to dwell on...

For example: What is it? Where is it? What causes it?

Do you really want to know? I mean, it's not like we can stop breathing if we don't like the flavor of the air today...right?

Okay, okay, here you go: We'll talk about these major types of air pollution and facts associated with them. 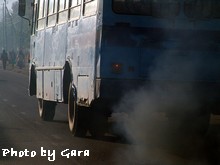 Wait a minute. Aren't we supposed to be worried about DESTROYING the ozone layer? What's this about it being a source of air pollution??!

The problem is when things aren't where they're supposed to be.

The ozone layer, that's a good thing. It's a protective layer of ozone that sits up high in the earth's atmosphere and keeps the sun's radiation from frying us up. The ozone layer gets holes in it when we put pollutants like chlorofluorocarbons (I sure hope I spelled that right!) in the air - like you find in aerosol hair spray and air-conditioners and refrigerators.

If the ozone gets holes, we get skin cancer: Not good.

...combined with energy from sunlight, creates ground-level ozone, which you breathe because it's right there at nose-level. When you breathe it, it causes all sorts of health problems.

We've all heard of carbon monoxide. You can get those detectors to put inside your house if you have a gas furnace, because every year a certain number of people get carbon monoxide poisoning from their busted furnaces; and from bad personal decisions such as lighting the barbecue indoors or firing up the propane space heater in the house when the power goes out.

What do all these things have in common?

So, why don't we all DIE from carbon monoxide poisoning?

Because the earth's atmosphere - so far - is a very big place compared to the number of cars.

But it's shrinking fast. Read about Beijing's ongoing battle with air pollution from car exhaust.

Air pollution fact number three: Sulfur dioxide is not just about acid rain and not just caused by factory soot...

Think diesel fumes, which by the way is so nasty it should have its own category; )

Okay, it's not just diesel burning that puts sulfur dioxide in the air; it's just combustion, once again -- of coal, oil...and DIESEL.

Part of the sulfur dioxide gets dissolved in rain water (it's very water-soluble gas, for all the chemical girls out there) and comes down as ACID RAIN...oh joy...

...and the rest of it goes into YOU when you inhale.

Air pollution fact number four: Particulates are not good to breathe, and the smaller they are, the worse they'll treat you.

It turns out there are all sorts of things just hanging around in powdered form in the air. Everything that gets worn down, ground up, or cut with a saw ends up putting DUST in the air. And then there's pollen, mold, bacteria, fungus spores, viruses...

If it's light enough to FLY, it ends up in the air, and gets called a particulate - so the EPA, in order to classify the DUST, split the world of particles into BIG particles and SMALL particles.

The big particles (AKA coarse particulates) are about the size of bacteria, so you can't see them with the naked eye; but the small ones (fine particulates - what else?) are too small to see, even with a microscope.

Apparently coarse particulates are not too worrisome because, well, they get stuck in your nose and throat before they can make their way into your lungs. (Very attractive; )

So that's the dusty stuff that's just powder hanging around in the air. But guess what the real health culprits are?

Yep, you got it: Fine particulates.

These come from -- just push "play" again, please -- COMBUSTION OF FOSSIL FUELS. Cars, trucks, airplanes, buses, boats, and also power plants, converting fossil fuels into electricity. Fortunately, we can generate electricity from clean, renewable sources like sun, wind, and hydroelectric generators; we don't HAVE to burn fossil fuels. But a gas-gulper, no matter how well you muzzle it...

...still coughs up a certain amount of dirt.

Air pollution fact number five: Air should not be BROWN.

These nasty little devils are also the product of fossil fuel combustion, and are responsible for that brown layer you see on the horizon when you fly cross-country.

There are three major Nitrogen Oxides: Nitric Oxide (NO), Nitrous Oxide (N2O), and Nitrogen Dioxide (NO2).

Most of the Nitrogen Oxides spitting out of the TAILPIPES of the world are in the form of Nitric Oxide (NO). A little bit of Nitrous Oxide (N2O) is also produced, which is a notorious GREENHOUSE GAS (of global warming fame).

Now, back to Nitric Oxide (NO). When that Nitric Oxide(NO) bumps into the Oxygen(O2) in the air, they react to form Nitrogen Dioxide (the brown stuff, NO2).

No? Okay, let's review.
Car >> spits out NO >>which bumps into O2>>and forms N2O.
So far, so BAD.
Now you've got a bunch of N2O floating around in the air. Then what happens?
Well, during the daytime, when SUNLIGHT is shining on it, raining down its photon torpedos...
...N2O bumps into more Oxygen (O2) to form nitric acid (think acid rain) and nitrate particles(cough, cough...).
And at NIGHT, N2O bumps into OZONE (remember ozone?) and reacts to form various CARCINOGENS.

Air pollution fact number six: If you're going to burn, don't do it halfway.

You know the smoke you see (and smell) coming out of an old car's tailpipe? Those are partially-burned hydrocarbons. This is the fuel that doesn't get totally burned up when you drive a gas-powered car. It goes into the air and is a major component of SMOG. Today's cars are a lot better at keeping partially-burned hydrocarbons out of the air, although not even close to perfectly...

...but there are still lots of old cars on the road, aren't there?