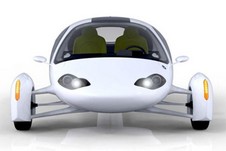 The Aptera is slightly behind schedule. Why? Like a lot of us, at the last minute, she had to change her dress. Then shoes. Then, you know, one thing leads to another, and pretty soon everybody's getting drunker and drunker in the den, waiting for a finished product to come strolling down the stairs...all the while speculating on just what might be taking her so long!

Take it easy: it's all good. She's worth it. Nothing's rocked the wheeled world like the Aptera since...since the Model A replaced the horse, I'm serious. This vehicle is different, really different, in ways that are so unprecedented that you might expect to run into any number of glitches and production delays anyway, even if the whole world economy hadn't gone to hell in a handbasket between her conception and birth.

Update: Damn, I hate being wrong. But as of January 2010, Aptera looks like it's going exactly nowhere. Why? Because the original founders, Steve Fambro and Chris Anthony, have become separated from the company. If you were at the San Diego EAA meeting in December, you heard it straight from the horse's mouth. Were they ousted? Bought out? Pushed out? It all amounts to approximately the same thing. The heart of Aptera has been replaced by some other sort of organ. So.

You've heard the phrase, "rats deserting a sinking ship?" Well, if I'd put a deposit down on one of these, which I didn't, so take it for what it's worth, but...if I had? I'd be demanding my deposit back before it EVAPORATED, and I'd be heading for the nearest lifeboat.

Aptera is aerodynamic, taking a cue from nature.
Looking at it, my first reaction was, "Where have I seen that shape before?"

After thinking about it a minute, I said, "Oh. Biology class." Although it's never occurred to Detroit auto designers to mimic nature to build a more aerodynamic car (because they've always preferred to burn as many fossils as needed to push a brick down the street instead), it's a good idea. It really makes a huge difference in fuel consumption.
Why can they do this? They build the body with composites, like a boat. 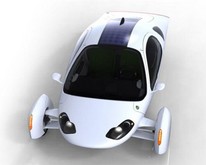 It's a three-wheeled motorcycle, but safer.
Now, rolling out your new "electric vehicle" as a motorcycle gives you some advantages. You can legally get on the freeway, if you've got the muscle, without all those annoying (and expensive!) NHTSA-mandated crash tests.

Aptera swears that avoiding the safety regulations was not the point, though. They just made use of the category "motorcycle" to bring Aptera to market quickly. You have to hand it to them: There are airbags, a front impact zone, side impact beams, and some sort of composite roll cage. Sounds like a lot more attention to safety than your average Harley designer put in.

Bottom line: It's a great new vehicle, there's room in it for a friend and the groceries, it's innovative and green, and it's a little late. Who cares? I'll wait!