Build an Electric Car for about $2200 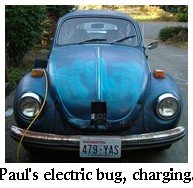 Paul Holmes, a Washington math teacher, discovered he could build an electric car - a converted 1971 VW Superbeetle - for about $2200...with no prior experience.

I caught up with him to find out how he did it, and why he decide to take on this EV conversion project!

Lynne: Hi, Paul. Welcome. So you started out to build an electric car with an old VW bug. What did you do to it? Where did you start? 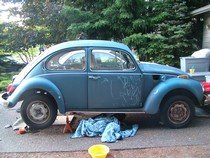 Paul: Basically, I took out the engine, which I had no idea how to do. I just started unbolting any bolt that I saw. Then I got a book on VWs, and it explained how to do it. I jacked the car up in back, laid the motor (which was now on the ground) on its back, making it shorter, and slid it out from the bottom of the car. Then some guy bought it for $160, making the car cost a total of $40.

I bolted one of the adapter plate things (there are 2) to the face of the motor, and then bolted the other plate to the transmission. I used grade 8 bolts.

I fixed all the things wrong with the car, like the brakes. It was terrifying to drive at first, because I had never done any work on any car before, and I thought the brakes would go out on me after fixing them.

Turned out okay, I guess.

Yeah. VW's are pretty easy to work on.

Starting the Electric Car for the First Time... 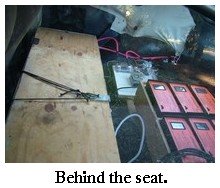 I put in the battery box, put in all the batteries, made a little spot behind the former back seat for the controller, pot box, fuse, chargers, and precharge resistor.

I wired it all up (which was sort of confusing!), and just finished as it was getting dark. I decided to carelessly try it out before it was pitch dark, not even knowing if anything was connected right. I put it in reverse, and the car jerked.

The emergency brake was on! Haha!

Then I took it off, and drove away. Man, it was weird. I love sitting at stop signs in dead silence, and then driving away.

What NOT to Do When you Build an Electric Car 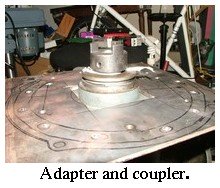 Any potholes you'd like to warn somebody who's going to build an electric car NOT to step in?

I would say with building an electric car, getting the adapter plate and coupler perfectly centered is really important. If you are more than a few thousandths of an inch off, it will cause problems down the road.

It's maybe best to have it done professionally, but if you can't afford that, then go ahead and try it! hehe.

And then with building your own controller, you really, really have to be meticulous. It will now be much easier with having the professionally made control board with all the pre-done holes and labels, but you still need to be careful that you plug the right stuff into the right spots. Also, make sure you don't solder the mosfets where the diodes go, or vice versa, since they look almost the same, and make sure you don't solder the capacitors backwards (+ and - reversed). I did that on accident once! Grr!

Soldering the control board video


Soldering the capacitors backwards? That sounds dangerous. Is it dangerous to build an electric car, working around high voltage?

No, it's easy to be safe around high voltage. Just take a few basic precautions.

Here's the safety list. If you're going to build an electric car yourself... 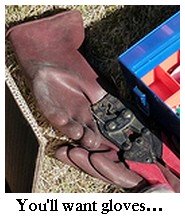 So how much did it cost to build your electric car, total?

Why did you decide to build an electric car in the first place?

I want our natural world to improve with time rather than get worse. One way to help with that is to reduce the cost to build an electric car. I can't do much about the price of Lithium batteries, but I can show you how you can make an electric car for under $3000 that can go 80 mph and has good to very good acceleration. The only compromise is total distance.

I notice that in your YouTube videos, you have "What Would Jesus Drive" listed in the credits. A lot of people convert their cars to electric for a lot of reasons, but I don't know of many that convert their cars because of their religious beliefs. Can you say a little more about that, and what events led you to build an electric car? 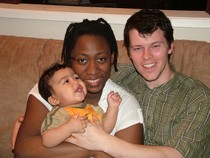 Yep, Sabrina and I got involved with electric cars as a practical application of our faith in Jesus. Here's a short version of how some of the story goes...

We went to Kenya in October, 2006 to adopt a little 3 year old boy from Mother Teresa's Home for children in the Huruma slum in Nairobi. He was there at the Nairobi airport waiting for us with the sisters in the blue and white Indian saris. We moved to Kisumu, Kenya, because it was expensive in Nairobi (and dangerous, and very polluted, and...)

While we were there, we witnessed a complete transformation of their climate. It rained all the way through their dry season. The change was catastrophic to the growing season. The old people had never seen anything like it. We saw the price of tomatoes and corn go through the roof. Many people died because of the bizarre climate behavior. There were catastrophic water shortages during the 6 months that we were there. We could still buy it for $5 or $10 at the store, or use our $300 water filter, but no regular Kenyans could. It was interesting to hear random people from the tribes explain to me that the climate was changing, never having heard of climate change.

Our son of 6 months was taken from us, because the Kenyan government changed the adoption laws before we finished the process. They made it so you can't adopt a "pre-identified child". The newly formed adoption committee has to choose the children to be adopted. My goodness that was bad. We also were trying to adopt a girl that we met while in Kisumu. She's somewhere around 10-13. She doesn't know. Now, we pay for a lady to take care of her, and she's going to come and visit hopefully soon, when we can get the money together.

Anyway, I can't imagine Jesus driving around in a Hummer while a little baby starves because of catastrophic effects on crops due to climate change. "Whatever you did to the least of these, you did to me." Our children are in Kenya. I would like to help reverse or at least help slow the destruction the industrialized world has caused. I will build an electric car.

Thank you, Paul. My best to you and your family, and I hope you're all able to be together again very soon.

That's the best reason I've ever heard to build an electric car, or convert your gas guzzler to electric!