Ever thought of doing a cheap electric car conversion? Yeah, you're not the only one! So I thought I'd talk to someone who'd actually built an EV for under $1000 to see how it's done.

In this interview with Darin Cosgrove (of "ForkenSwift" fame), we talk about all the work that goes into a successful marriage between an old Geo Metro and a used Baker forklift, and the Forkenswift Principles that make it possible to save a ton of money when you're building an electric car - scavenging cheap electric car conversion parts from forklifts and such, doing all your own welding and fabrication, borrowing equipment you'll only use once (rather than buying it), and selling your old gas-gobbler's guts on Ebay.

Bottom line? As we like to say around here, you can either save time or money, but not both!

Less than a thousand bucks for an electric car conversion? Really?

DC: Yep. You can check out the Forkenswift website for complete cost details, but the total was $672. Obviously the project's cost is what most people find interesting about the ForkenSwift. But it's not a "one off" freak. Since building the car, I know of at least two other faster, more powerful (72 volt) cars that have been built inexpensively; Paul & Sabrina's car, and Ben's Electro Metro.

Can you tell me a little about yourself, your background, your interests, hobbies, work, that sort of thing. How did you and Ivan get hooked up on this project together?

DC: I'm a self-employed computer nerd by profession (web sites). I've always been interested in mechanical things, cars, energy efficiency. Sailing is a favourite hobby and also mountain biking. I met Ivan years ago through mountain biking. He's an industrial electrician by trade and also a long time gear head, though less time for projects now with a baby at home.

That Baker forklift doesn't look all that big, but it sure made some holes in the driveway!

DC: You're right - it doesn't look big (actually a smaller footprint than the car its parts went into). But it was HEAVY! About 16,000 lbs minus the battery (which would have weighed another 3000 lbs). Getting the delivery before the spring thaw was in the back of our minds. 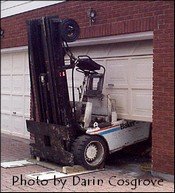 That's your house with the Baker forklift sticking out of the garage, not Ivan's, right? Your neighborhood looks...hm, like it wouldn't have a lot of tolerance for a forklift in the driveway. Did you get any feedback on your driveway decoration? Also, I'm curious, what was your family's reaction to the Forkenswift project's impact on daily life?

DC: It gets even better than that - it's my parents' house! (I don't have a garage.) We needed to take delivery of the forklift to somewhere with (A) a paved driveway (Ivan's is gravel) and (B) a garage. My parents said they really didn't mind (I asked twice, honest). We worked to get the forklift stripped of its useable parts and removed less than a week.

The neighbours were actually great about it - more curious than peeved. When I told them what we were doing, I got the definite impression it softened any, um, objections they might have had. I mean, making an electric car is an interesting thing to do, in most people's eyes. If we'd just been breaking forklifts in the driveway for profit, I'm sure they'd have had a different reaction.

In your adventures with converting your little car using those scavenged forklift bits, I noticed some common threads or ideas and started calling them the Forkenswift principles - the things you did that really made you able to build an electric car for so little actual money. So here they are, and I'd like to hear your comments on them. 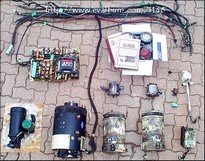 #1: Fix it, don't buy it.
You fixed a lot of stuff, like cleaning out the rust and welding the holes. You could call this "Recycling 2.0".

DC: Not having the benefit of rust-free cars like they do in the southern US, or Canada's west coast, we knew we would have some extra work ahead to bring an older car up to snuff to pass inspection.

#2: It takes a lot of work to save money.
This is the step a lot of people don't want to take, and you pointed out yourself that you could have just worked a few more hours and paid for stuff rather than doing it...but that it was actually kind of fun.

DC:True. We've been asked many times since starting this project if we are taking orders to build & sell cheap electric cars. But if we price the labour in it, it's no longer an inexpensive car! That said, when its your hobby or for fun/personal development, you don't count your time.


#3: Borrow stuff from people.
Like the railroad jack, for instance. The welding equipment. There seemed to be a lot of "somebody knows somebody who's got..." going on.

DC: There was definitely a lot of that going on. I have joked: "it takes a village to build a cheap electric car conversion." Maybe one of the benefits of a small city (town, really) is you end up knowing a lot of people who are interested in helping out when you tell them what you're up to.

#4: Learn how to do stuff from other people who already know it.
You got a lot of help from other EVers. Do you have favorite lists and forums you can recommend?

#5: Don't be afraid to try it.
You tried a lot of stuff you hadn't done before. Welding. Forklift salvage. Pulling engines out of cars. Building a pusher trailer for the bike.

DC: The project was really many projects in one. Learning new stuff was part of the fun. And a great excuse to buy a few new tools :).

#6: Document your mistakes.
It's hard to even talk about doing something wrong that costs time and money, but people commented that it helps others not make the same mistakes.

DC: We made some definite blunders - like buying the first car that turned out to be too rusty underneath. We were lucky none of the mistakes cost much money.

#7: Sell the stuff you don't need.
It takes a lot of time and energy to sell stuff, and I think people sometimes find this part a little daunting.

DC: You've read the thread, so you already know that at first we budgeted around $2000-2500 for the project, as a worst case scenario. But when we sold the forklift for scrap, and then one of its extra motors, we realized the 'net' cost could be a lot less with some effort. 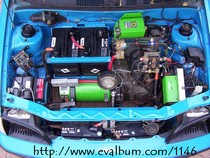 I think I mentioned in the build thread that when I realized how much money could be recovered selling surplus forklift parts, then keeping the overall project cost low became one of our main goals. Most people won't put THAT much effort into cost.

Have you helped other people build their own cheap electric car conversion out of used forklifts since you built the ForkenMetro?

DC: Not directly, but virtually. After all the help we got from other people we've never even met, I made the choice to document the project in order to "pay it forward", to borrow a cliche.