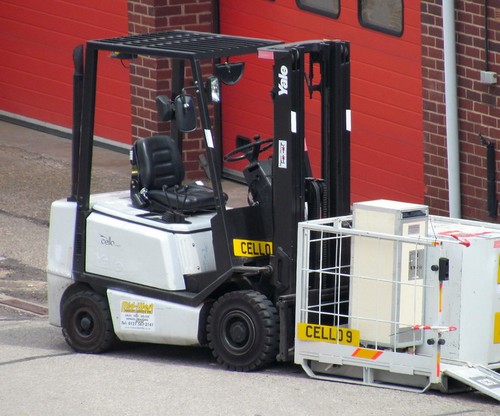 Can you build cheap electric cars out of used forklifts? Yes! Reportedly less than $1000, if you sell unwanted extras as you go.

A while back I ran across a very informative thread on the DIY electric car forums, started by Jim Husted of Hi-Torque Electric, on low-budget electric car conversion and the fine art of forklift salvage. It ran some 50 pages long, at last count, but it had so much good information in it that I thought I'd share some of the highlights. You can read the original here yourself, if you've got the time!

When you start taking apart your (very heavy!) electric forklift, you're looking for this grand prize inside: 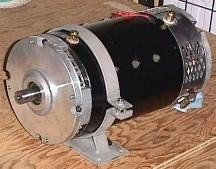 You'll find other DC motors on a forklift, but to move your electric car, you'll want the series wound one. This usually means the traction motor. You might even find a suitable AC motor on a newer forklift.

In good condition, which means: 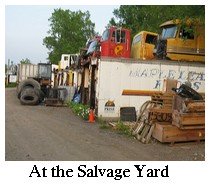 Sell the extra stuff.
You can salvage a whole bunch of stuff from a forklift, which can then be SOLD on Ebay or wherever to finance the rest of your conversion. Darin Cosgrove, one of the partners in the Forkenswift project (mission: to build an electric car conversion on a beer budget), discovered this resale trick brought the Forkenswift's conversion budget from $2200 CDN to something more like $600. Read my interview with Darin on his forklift salvage project here.

There's usually more than one electric motor on a forklift to salvage.

Lifts can have from 2 to 4 motors on them. "The 2500 pound capacity lift will have a decent sized drive motor if it's a sitdown type truck if it's a standup type it'll have a smaller motor probably a 7 inch diameter 80 pounds there are people using these 7 inch motors and lighter conversions but they're usually blower cooled." (- Jim Husted, DIY electric car forums cheap electric cars thread)

There's a right way to drain the hydraulic lines.
On your forklift salvaging adventure, "...if you have to remove any hydraulic lines make sure the mast is at its lowest position then drain the reservoir. Have a large pan available to catch the oil and kitty litter to soak up what spills because it will. I used most of a 50 pound bag of stuff from the auto parts store." (Mel Jones, DIY forums cheap electric cars thread)

Scrap metal plate salvaged from the forklift can be used to build a transmission adapter.
"If there is any big metal plate thick enough to make an adapter for the motor to transmission say that even if you have to torch it luckily the control cover was 5/16 inches in 18 x 24" on my forklift." (Mel Jones, DIY electric car forums cheap electric cars thread) 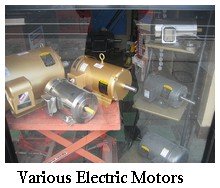 Me: Why do some motors have two power lugs and some have four?

Jim: Two posted motors only run one direction and are pump motors, unless they are a per mag which switching the cables would make it reverse. 4 studded motors are usually drive motors (they do have 4 term'd pump motors, but rare and are just motors that could have been used for either a CW or CCW rotaion pump. Series wound motors have thick, corse, field windings. If you see thin wire, it's a sep-ex or compound wound motor.

Can you feed a motor any amount of voltage without damaging it?

Jim: No. Motors are limited (in huge ways) by the number of commutator bars they have; the higher the bar count the higher the voltage it can handle without arcing. Higher voltage rated motors also have field coils with smaller wire but more turns, and are the only differences between some of ADC's 36 vs 72 volt rated motors. It's not like a 24 V motor will melt if you feed it 36 V it might over-rev it to death if it's not under load. Voltage creates speed, current is torque.
100 amps at 48 V is the same work as 48 amps at 100 V of equal 4800 W. General rule is "volts up, current down". The "flashovers" that the racers see constantly is caused by excessive voltage so little extra won't kill it but a lot will. 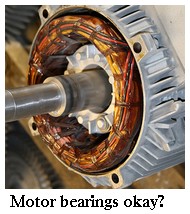 Will any 8 inch 36 to 48 V motor work okay with 144 V? How does the horsepower change with added voltage?

Jim: a lift motor can usually be over-volted (by the data tag rating) 2 to 3 times with 120V being used a lot already. You do have to advance the timing 7 to 10° depending on many many factors.

How can I tell if the motor is a series wound or shunt wound just by looking at it?

Jim:Series wound versus shunt wound or sep-ex use a small wire with lots of turns on the field coils series wound have thick flat wire with just a few turns 8 to 14.

You can visit the DIY Electric Car forums or Jimerico (Jim's company) for more information!