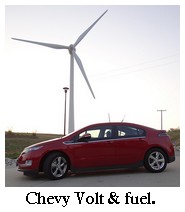 Okay, I admit it: Here at Electric Cars are for Girls, I've been just a tiny bit snarky about the Chevy Volt. Maybe it was GM's seeming ambivalence about the Volt; or maybe it was the bailout, or it could have been that brief and misguided campaign to force everyone - employee and customer alike - to say "Chevrolet" instead of "Chevy". Maybe it was the "EV with training wheels" idea, or the overhyped "range anxiety". I could go on, and… oops, I think I just did.

But after talking with Jeff U'Ren about his journey from EV-1 driver in the nineties to Volt driver of today, well, forget all the snarky things I said. I am ready to eat all the unkind words I ever (might have, allegedly) said about the Chevy Volt and apologize.

I think I've met the car of my dreams.

His first electric car was an EV-1 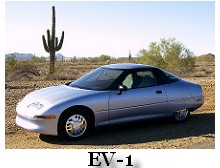 Lynne: Jeff, Is the Volt your first electric car? That looks like an EV-1 in your G+ profile.

I saw that in 'Who Killed the Electric Car?'. So you were one of those original EV-1 owners, huh?

Yeah, I got my EV-1 from Chelsea Sexton, actually. She was the person I dealt with at Saturn. I didn't start out as an electric car person, though. A friend had one of the original EV-1's, and brought it to work and let me borrow it for the weekend. That was all it took. I was thrilled by the way it performed. Somewhere along the line I realized I didn't need any gas, either; that I could have all that performance and handling and I didn't have to pollute the air.

I'm a car guy. Quality and performance is important to me. In LA, where I live, you really want a car that handles and performs well, you've got to be able to accelerate and zip around that truck barrelling into your lane. Environmental stuff is great, but performance is at the top of the list.

What I figured out pretty quickly is - that's the magic of an electric car.

You don't have to be an environmentalist to do good. You're saving your gas money, you're cleaning up the environment, you're doing good for public health…and you're driving a great car at the same time.

When you got the message from GM that they wanted the cars back, how did people take that? Did you believe what they were telling you?

The company was telling us the party line, but we all knew better. It had to do with the CARB regulations and the pressure those put on automakers to cut emissions by a certain date.

So you weren't political about environmental stuff before then.  What, did you just fall in love with the car?

I definitely was not political about it then, nor am I really now. It's just that an EV is a better consumer product, and people want them, but car manufacturers have been reluctant to build them. It's frustrating from a consumer point of view.

I loved that car. I looked forward to driving that car every day. It was so much fun that even if I knew I was going to have a crappy day at work, I'd think, yeah, but I get to drive the EV-1 on the way there and back; so no matter what, it won't be all bad. 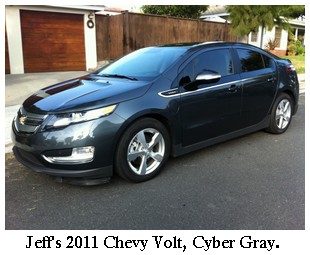 So how did you get from the EV-1 to the Chevy Volt?

I'd joined Plug In America, and kept in touch with Chelsea Sexton. There was always some idea that the EV-1 would be brought back and that we'd then get to purchase one, but that never materialized. What did happen was that in April 2010, GM invited 8 of us who had been EV-1 drivers to come and drive a prototype of the Volt on a course set up at the Convention Center at Long Beach. They said, "Drive it any way you want". So I took them up on that offer and drove it…

…yeah, sort of, to see what it was capable of in terms of aggressive handling and braking. Doing donuts and taking out orange cones on the track, that sort of thing. But by the end of that test drive, I knew I had to have a Volt. I was very impressed.

So is the acceleration, you know, electric? The famous low-end torque?

Want to read more of this interview?  Go on to page 2.