I'm talking this week with Don Otto about his electric bicycle conversion using a kit he got at Five Flags Motorbikes in Pensacola.

The bicycle he used for his conversion was a Schwinn from his local Wal-mart. Don said the whole thing didn't cost much (less than a thousand dollars, including the new bike); and once the bike and kit arrived at his house, the conversion took an hour and a half to complete. 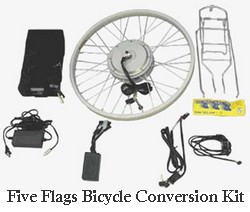 He says if you want an EV grin on a budget, an electric bicycle conversion is the way to go!

Lynne: Hi, Don, and welcome! So when did you do your first electric bicycle conversion?

Don: My first efforts on an electric bicycle conversion were in the late 60's, around 1968. I converted a mini bike to electric using an old chevrolet generator and a couple of old batteries. It worked! A friend of mine and I rode it to a science fair at a mall about 10 miles fom my home and then again back home at the end of the day. I have always been interested in electric drive transportation. I was intrigued when I saw an article in Mother Earth News about an Opal GT that was converted using a DC-10 starter generator.

After years of hit and miss, I found a company in Florida that was introducing electric bike conversion kits: Wilderness EV in Florida. Since this seemed to be within my budget, I made some inquiries, and found that they sold several different styles of conversion. One was a motor drive to chain, which looked very neat, clean, and easy to assemble. The wheel hub motor drive system had a bigger selection and wider application ranges for flat ground and hilly areas. I chose an all around application for a 26" bicycle which they also have for 20" and 24" models.

The next step was to purchase a bike.

Did you just use an ordinary bicycle, or how did you decide which bike you'd like to convert? Are some better than others for conversion?

I needed an all around load capacity bike; in this case a three wheeled bike was most applicable.

The model that caught my eye was a Schwinn. Wal-mart carries these bikes, special order only. It took several weeks to come in.

I finally had all the pieces, kit and bike, just sitting there waiting for assembly.

How long did that take, and what parts were involved?

What are you using your electric bicycle conversion for, primarily?

This bike was used for an errand runner. I go from my shop to the bank, grocery store and post office. The nearest wal-mart is 18 miles away, and on several occasions we have taken it there. At an average speed of 35 mph it was more than ample for this application, it does make the round trip of about 40 miles.

On one occasion Wal-Mart offered to let us plug it in free of charge.

Is your conversion(s) the power-assist type?

Yes. It is suggested that you get the bike moving before activating the throttle. There's less strain on the motor and battery that way.

Is your electric bicycle conversion an AC motor or DC?

This is an AC motor, so it's got regenerative braking which helps to re-charge the batteries while coasting.

How much does/did it cost to do a conversion?

The initial cost of the motor kit was just at $300 and bike around $250. They are selling more advanced kits that have speeds up to 50+ mph and which cost about $1000...but what a thrill!

I see you've done more than one electric bicycle conversion. Are you doing these for yourself, or for sale?

My original intention was to build these bike for resale but the market has been soft. A lot of people seem to be afraid of electric technology, and pass it off as a novelty.

There have been many advances in the electro-motive industry in the last 20 years.

Anything else to add before we close?

Just that electric bikes are the way to go. They're cheap to build, cheap to buy, and cheap to run.

Back to electric bicycles.