This is Part Two of my interview about electric bicycles with Tim Ritchey, owner of Emerald Velocity, an eBike shop in the Pacific Northwest.

In this part, we'll talk about eBike conversion and electric bike riding laws.

In Part One of Electric Bicycles, we talked about cost, different types of electric bicycles, and commuting. 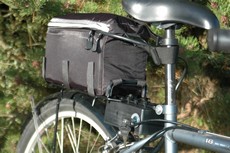 Tim, tell me about your first electric bicycle.

My first electric bicycle was a 48 Volt 500 watt geared hub motor with four 12 volt SLA's (Sealed Lead Acid) batteries on the back rack. I learned two things right off the bat:

First, that lead acid batteries are very heavy and should NOT be used on a bike conversion and especially not place up high on a rack. The center of gravity is way too high and this makes for a very unstable ride. The rack must also has to be rated for that kind of weight. It's better, if you must use SLA's, to mount them in saddle bags (or panniers).

And second, with lead acid batteries the "advertised range" will NEVER be achieved. I was told 20 miles could be expected. Not in my life time. We saw ranges of 8 to 12 miles and the 12 miles included 4 miles of downhill. Oh and don't even think about range and riding up any hill. This only killed the SLA's that much quicker.

So, how hard is it to build electric bicycles? 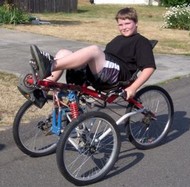 While the idea of building an eBike yourself - the DIY approach - is a great way to get started, you should understand what you're getting into if you do that. Set your sights on a good hub motor, 500 watt minimum (3/4 hp), a good controller, a quality throttle, and of course a 48 Volt Lithium Ion battery pack with a BMS (Battery Management System). The bike should be light weight and have a steel front fork without shocks. A front hub motor may wear out front fork suspensions prematurely due to the forward lateral torque motion. You will also need a "Torque Arm" to keep your front axle from spinning and twisting the wires that go into the hub.

I understand it's cheaper to convert a bike than to buy an electric bike that was built electric from the ground up. What would you call that, OEM?

Yes it can be less expensive to convert your existing bike rather than to buy a new Izip, Giant, or any other name brand electric bike on the market. OEM is Original Equipment Manufacturer and basically means that if it's a "Giant eBike", Giant is the OEM and you use parts from Giant to repair or upgrade your eBike.

If you already have a bike that you would like to convert it can be done. Most bikes can be converted to electric but not all. 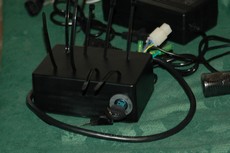 Anyone can buy an inexpensive hub motor, controller, throttle, and lead acid battery pack online for around $300 to $500 and install in on their existing bike. As with anything, you get what you pay for. The more you spend the better the products and services you receive.

If you're mechanically inclined, I'd say go for it, but spend as much as you can afford. I didn't say to buy the most expensive there is, I said purchase the best that you can afford. Just like me, most people start out with a very low budget. Let's say I've got just over $300 and I'm hot to electrify my mountain bike. It's a learning process and it is best to go to the school of low cost hard knocks like I did.

If you've already got a bike that you like, how much does it cost to convert it to electric?

Do you have to do that yourself, or can a regular bike shop do your conversion for you?

Many bike shops can install your new hub motor kit on your bike but if they have not done it before and are not familiar with the process, you could end up with a very expensive NON- electric bicycle.

Just like an electric car, electric bicycles can be set up with many types of motors like brushless, brushed, front hub, rear hub, and motors that are in the drive train or near the pedals. All of the motors that I have mentioned are DC type and I don't know if anyone is building eBikes with an AC motor as used in more and more electric vehicles these days.

Can you ride an electric bike on a regular bike path? Do the "no motorized vehicles" laws apply to electrics, too?

I have not looked this up under Washington State law, but I did inquire with two local western Washington trails and I was told by both organizations, "You're really not supposed to have ANY kind of motorized vehicle on the bike paths. That rule was set up and focuses on mopeds, scooter, all terrain vehicles, and golf cart type vehicles that were not operated by the trail maintenance crews".

Handicap scooters and powered wheelchairs are fine. They told me that as long as you ride at the same speed as other riders, are not a nuisance or endanger other trail users, it would not be an issue. Just as when you're driving your car or riding on the street, if you don't play well with others, you will be called out and may even get cited for your actions. When I do ride on the paved trails, I typically go unnoticed.

So don't be obnoxious if you don't want a ticket. Words to live by. Thank you, Tim!

You can read Part 1 of our electric bicycles interview here.