Part 2 of my interview with Dennis Bieschke of NetGain - talking about making plug-in hybrid cars out of old gas hogs with their EMIS kit.

Part 1 of this interview can be found here.

In this part, we talk about what type of vehicle would benefit from this retrofit; why Detroit doesn't sell a retrofit kit to convert their old Bush-era gas hogs into sleek, modern plug-in hybrid cars, and how to lay hands on one of these groovy kits for yourself.

Stuck With a Gas Hog? NetGain's EMIS Can Fix That!

Me: This EMIS seems like excellent pain relief for those of us who are stuck with our giant SUVs that we now can't get rid of because nobody else wants them, either! If I was getting 15 mpg in my ginormous Suburban, how much can I expect the EMIS to help with that? Can we realistically get 25-30 mpg with these converted hybrid cars?

Dennis: EAS. How can the EAS help with that?

Dennis: One needs to remember that EAS was originally conceived as an offering to fleet vehicles that travel an average of 84 miles per day and average 6-8 miles per gallon. The expected payback period for vehicles in this initial target audience is approximately 30 months (without the benefit of any tax credits or other government subsidies. In general, the greater your gas mileage, the lower the potential fuel savings benefit of EAS. With continued optimization of the system and as production volume increases, NetGain projects that critical component quantities may bring the cost down for normal passenger vehicles to the point where they may experience a similar payback period.

We have heard "unsubstantiated reports" from users of these (EAS-converted hybrid cars) that are running at 72 Volts that indicate they are receiving almost double these savings. We have recently upgraded our test vehicle to 72 volts and will begin testing the second week in July.

Translator: The worse your gas mileage sucks, the better you're gonna love our EAS. We started out with the worst gas-guzzling offenders on the roads - delivery truck fleets - so the payback for them is 2-3 years. If the price of gas continues to escalate and we continue to bring down the EAS hybrid car component costs, even your Lincoln Navigator is going to pay for its EAS conversion in very short order. We're testing a bigger battery pack to see if more is better, and hey...isn't more usually better?

Me: This EAS turns my gas-guzzling SUV into a parallel hybrid, right?

Translator: These conversions are plug in hybrid cars, in fact, not like those big rolling power-tool chargers Chevy has been trying to pass off as hybrid cars.

Me: The EAS sounds like a cheap and easy fix for pitiful gas mileage, and most of the SUVs built in the last ten years are just the type your system will attach to; rear wheel drive. So why doesn't GM come knocking on YOUR door, rather than closing its gas-guzzler plants? Isn't this a match made in heaven, if Americans actually do want to drive giant gas-guzzlers (the better to pack around our supersized McDonalds bootays), and you've got a way to make it less painful by turning regular cars into hybrid cars?

Dennis: As you have seen already in the market, Ford and GM are developing integrated hybrid car models for their respective SUV lines which would be the logical design, test and build cycle of a major manufacturer. NetGain Technologies' focus has been on the existing market (865 million vehicles worldwide), rather than new since most delivery type vehicles are on the road for 10-17 years and this technology has the potential for a greater environmental effect with conversions rather than new vehicles.

Translator: GM wants to build new cars. We've found a way to recycle the gas-hogs you're already stuck with into plug in hybrid cars. Think of it as aftermarket therapy for painful gas.

Me: Just how many of these wonderful gizmos can you guys supply? Everybody wants hybrid cars now! Are they available today, for me and 10,000 of my closest friends? We're allergic to delayed gratification!

Dennis: We are currently working with potential strategic partners who are experts in the commercialization of newly developed products so that once introduced to the industrial market, we can support the technology with product and the expertise which will then allow EAS to advance into the consumer markets. If you know of any potential partners that would be interested, please put them in contact with us.

Translator: Not all ten thousand of you at once, no. We've hooked up with a few dozen conversion shops around the US that know how to install them, because it's a little tricky to get it right and electric cars have enough trouble getting love from the media without an unnecessary scandal caused by a faulty installation.

Dennis: The current components offered by NetGain anticipate that the batteries (48 volt DC configuration) will be recharged as needed, which in most cases would be daily when the vehicle is not in use. 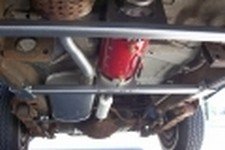 That is, the current version of EAS produces a 'plug-in electric hybrid car'(PHEV).

A standard charger that is rated at 48 volts would be needed. Our goal was to improve MPG as much as possible - therefore, it did not make much sense for us to use $4.00/gallon fuel (petroleum) to create $1.00/ gallon fuel (electricity). The rule of thumb used at 48 volts is that for every bank of 100 AH batteries you can get useful assist for around 50 miles of combined city/highway driving before a recharge is necessary.

Translator: Do you want to use expensive gasoline to produce cheap electricity? Probably not, since you're not an oil company exec. So we took the sensible approach - 48 volts is just enough juice to save you money and take you as far as you'll need to go without needing to recharge except at night. And no, the charger is not included.

Gotta have it right away? There's a list of US EMIS Dealers here.

Part 1 of my interview with NetGain's Dennis Bieschke.

Part 3 of my interview with NetGain's Dennis Bieschke.