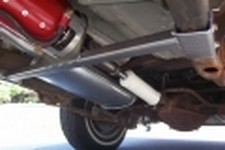 Gargantuan gas-gobblers like delivery vans and half-ton work trucks are probably too big and heavy to convert to 100% electric.

Unfortunately, these are just the vehicles we Americans like to drive! In the case of small delivery vans, which get somewhere between 5-8 mpg, we don't have much choice but to drive them, either...so what do you do?

Well, what if I told you NetGain's come up with a way to convert the worst gas-guzzlers into plug-in hybrid cars? NetGain, the company that brought us the fabulous WarP 9 DC motor that powers most of the electric car conversions we're driving around, has invented the Engine Motor Interface System (EMIS), which takes one of these big honking gas-hogs and tames it down into a kinder, gentler gas-hog with significantly better gas mileage that you plug in overnight.

...these are perfect candidates to be converted hybrid cars using the EMIS from NetGain.

What does this mean to you? Twenty-six percent better gas mileage, a conversion cost of about 7k, and it can be done in less than a day. 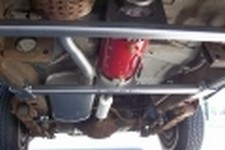 This past weekend, I got a chance to talk with Dennis Bieschke, member of NetGain Technologies LLC, about his company's EAS Kits starring the EMIS (stands for Engine Motor Interface System), and the fine art of turning gas hogs into retrofit hybrid cars.

Me: Let me make sure I'm understanding the concept correctly.
The EMIS is a hybrid car kit, basically, which includes a TranswarP motor, and which also includes a...what, a program for your car's engine computers, or another computer for the motor which communicates with the car's engine? Then the motor's computer makes a decision, based on several factors, to switch on the electric motor to give a boost of power when the fuel demand is high, right?

Dennis: Not exactly. EMIS is part of EAS which consists of an electric motor, batteries and a control system (patent pending) that provides electric power to the drive shaft SIMULTANEOUSLY with power from the gasoline engine in your vehicle. TransWarP Motors were developed as a motor that can be used with EMIS, but the system is actually "motor independent".

Translator: The kit is not called EMIS; EMIS is just the brain. The kit is called EAS. When you buy an EAS, you'll get an EMIS, one of our motors - not necessarily the TransWarP - and a bank of batteries.

Me: How do you know exactly when the electric motor should intervene to maximize fuel economy?

Dennis: You can read the patent, but the exact process is proprietary.

Translator: Nobody else is doing it today, but it's a really neat product, and we'd like a chance to beat our competitors to market, if it's all the same to you.

Me: Sorry. I mean, is it pretty obvious stuff (like when you're going up a hill, for example, or accelerating to pass on the freeway), or did you experiment with various things until you reached the maximum fuel economy in practice?

Dennis: EMIS is a patent pending technology developed by NetGain Technologies, LLC, that interfaces to a conventional vehicles on-board computer system to ascertain the current demands being requested of the internal combustion engine by the driver. Based upon numerous parameters, EMIS instantaneously determines the amount of electrical assist power that can be applied to the drive train electric motor of these hybrid cars in order to seamlessly assist the internal combustion engine.

Translator: We asked the car's computers when the engine needed a big drink of petroleum-based fuel product, and obligingly...they told us.

Gotta have it right away? There's a list of US EMIS Dealers here.

Part 2 of my interview with NetGain's Dennis Bieschke.

Part 3 of my interview with NetGain's Dennis Bieschke.