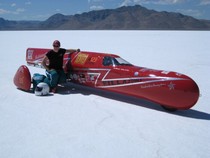 KillaJoule is the Killacycle racing team's salute to pure speed! At 218 mph, it is the land speed racing counterpart to the Killacycle's electric drag racing quickness (0-60 mph in .97 seconds!).

I talked with Eva Hakannson, the KJ's rider - and builder - about what it takes to go really fast on an electric motorcycle, about staying oriented out there on the salt flats, and about being a woman race driver in a man's sport.

The Fastest Sidecar Motorcycle in the World (is Electric)

Lynne:  The KillaJoule is a land speed record sort of electric motorcycle, right? I understand the team is heading towards 400 mph? I just got back from Wikipedia, and apparently that hasn't been done yet in a streamliner wheel-driven motorcycle - whether electric or gas-guzzler. At least, in 2010 the record was still 376 mph.

Eva Hakannson: Everybody is dreaming about breaking 400 mph. Nobody has done it with a motorcycle yet. This year the goal is 220 mph. The reason for 220 mph is that it would make KillaJoule the fastest sidecar motorcycle in the world. Of any kind! It would be the first time since 1899 that an electric vehicle is the fastest in its vehicle category (In 1899 La Jamais Contente was the first car to break 100 km/h (62 mph) and thus the world's fastest car was electric. Since then, internal combustion has dominated everything.).

Killajoule on the Salt Flats


What Will it Take for KillaJoule to Go THAT Fast?

What's the general plan for building a motorcycle that fast? Are you using AC motor(s) in it, or DC, right now?

We started out with DC, but were lucky enough to receive a sponsorship from EVO Electric in UK with a state-of-the-art AC motor, capable of 500 HP.

Would that need to change to get to 400 mph? 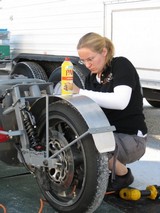 Same batteries as the Killacycle, or do you need different batteries to produce speed vs. acceleration?

400 mph would require a new battery pack, for several reasons. The present battery pack has too low voltage (375 V) to get the full horsepower from the EVO motor. About twice the voltage would be needed. At 9.1 kWh, the battery is probably also too small to make a full run. Last but not least, with the current type of cells, the pack will have to be bigger (maybe twice as big), to sustain 500 HP for a long time. The current pack can only give 500 HP for a few seconds at a time.

Surprise! It's a GIRL! 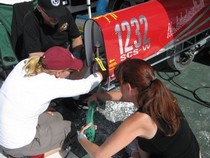 The land speed record holders all seem to be men. In fact, I read this over at Wikipedia: The holder of the absolute record for motorcycles is the "fastest man on two wheels". There's something delicious about an electric streamliner - driven by a woman - aiming for that absolute record.

I think it is a bit sad that we make a such a big deal about the difference between men and women. We are all humans. I grew up with two older brothers and I have never seen myself any different than them.

On the other hand, I realize that it is important for girls and young women to see another female succeed in a world traditionally dominated by men. There are so many girls that don't think they can do engineering.

Nevertheless, it is a lot of fun to change people's perspectives. Often, a spectator or fellow racer that happens by will initially think that the KillaJoule is gasoline-powered, built by Bill (my husband) and driven by Bill. They are first surprised (shocked?) when they discover that it is fully electric powered, then further amazed that a woman is the driver, then blown away that this cute young Swedish girl actually built most of the motorcycle herself.

Believe it or not, we universally get a very positive response from everyone. Racers want to go faster, and as we go faster with batteries and motors, they become more interested. We are an "open book" and are glad to help any racer that wants to "go electric." This makes us very popular on the track.

Inside the KillaJoule at Bonneville

Tell me what it's like out there at Bonneville, riding the Killajoule. It doesn't look much like riding a motorcycle!

Well, I can't say that it is a very comfortable ride. I am laying on my back with my chin on my chest. There is no room for a seat, my seat is the metal on the inside of the motorcycle's body. I am squeezed in and strapped in. I have a fire suit that is thick and warm enough for an arctic expedition (five layers of Nomex, over a centimeter thick). 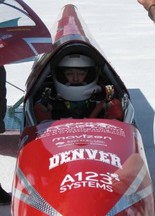 I have a seven-point seatbelt, helmet, gloves, boots and neck protector. My legs are held down with a net and my hands are strapped to my seat belt, giving just enough slack to steer and reach the fire extinguisher handle. The only thing I can move are my feet and my hands. When the canopy is closed, you better not be claustrophobic.

Last year it was brutally hot. This year I am installing a cold vest that circulates ice water under my suit, and maybe also air conditioning that blows cold air into the helmet. Even if the run only takes a couple of minutes, you can be waiting at the starting line for much longer. (Bonneville is known for its long lines, and it isn't unusual that you spend five hours in line, but typically you only spend 15-20 minutes fully dressed before you get to run. However, 15 minutes is a long time when the cockpit is hot as a sauna.)

Since I so far only have made seven full runs with KillaJoule at Bonneville, I am still really nervous while driving and the 5-7 miles feels very long. I am quite sure that I will enjoy it much more when I and KillaJoule get to know each other better.

How can you tell where you're going when you're driving on the salt flats? From the helmet cam in one of your videos, it all looks just white out there. 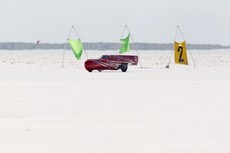 A streamliner motorcycle is typically a weird beast to drive, there is nothing like it. It is a motorcycle but you can't use your weight to steer it. However, since I have a sidecar it drives like a car. Driving straight ahead I can't tell which side the sidecar is on, it runs perfectly straight. I have to be careful while turning, though. Even if I have 60 kg of lead in the sidecar, it can tip over if I steer to the right at too high speed.

The sense of speed is very odd. At about 30 mph everything rattles and shakes and it feels like it is going really fast. It feels about the same up to 100 mph. It is almost impossible to tell how fast I am driving. There is no reference points in the landscape, the only difference is that the markers pass by faster.

Above about 100 mph, it starts to get smoother. At 150 mph it runs pretty smooth, but on the other hand it seemed to start to dance around a bit due to high aerodynamic forces (or it could have been the 15 mph winds I had at the last run I made; it is hard to tell). How it behaves beyond that I have no clue about, yet.

And still you keep driving KillaJoule between the little flags. So how do you stay oriented? Do you have instrumentation to help with that?

The "little" flags are the only things that mark the track.

The flags are in reality not so little, they are about as tall as a normal person and has a giant digit telling you which mile you just finished. However, KillaJoule was shaking so much that I completely missed several of the markers and thus also missed the end of the track once. When I saw a person with a big red flag waiving next to the track I realized that I probably should stop.

Luckily I wasn't going more than 120 mph or so.

To keep a straight line, I usually "lock onto" the mountain top and look far down the track.