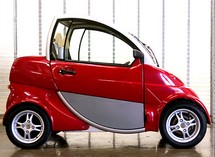 Oh, the name "Kurrent" lends itself to so many puns. I'll try to restrain myself; )

Update: Sorry, this company has gone out of business.

This is a classy little neighborhood electric car made by American Electric Vehicle Company in Michigan. It's of course governed to 25mph in most states, but is perfectly capable of cruising at 35mph without strain. I was pleased to see that the 48v system is powered by Trojan batteries (old reliable easily obtainable lead-acid golf cart batteries). 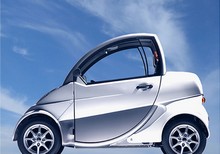 Looking at this car, it sort of reminds you of a Smartcar, doesn't it - and that's because of the European mini-car styling. American Electric notes on their website that this car evolved from the European line of economical little cars (which were originally inspired by motorcycles) rather than being yet another incarnation of the good old American golf cart, as many of our NEVs have been.

As if it were declasse to drive a golf cart on the road; )

Autobloggreen took a tour of the factory in December of 2006 and a test drive. Read the report at Autobloggreen for a good idea of what this little car is about.

Here are the highlights:

There is a separate 12v power system for the accessories and options that draw power (good thing);