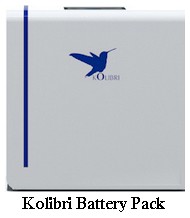 Update: Changed their name to Colibri, probably to avoid confusion with the Kolibri gun. Still going strong in 2018, though. Good to hear!

These awesome batteries are made in Germany and their target market is "airports, airlines, and ground handlers" (?) for the 80v pack and warehouses (forklifts, I suppose?) for the 40v.


What's being said about the Colibri batteries?

Recently DBM broke a long-distance EV record in a converted Audi A2 carrying 68kwh worth of their Kolibri lithium polymer batteries...

"The electric car drove 600km from Munich in southern Germany to Berlin without recharging its battery, setting what organisers hailed as a new world distance record for an everyday vehicle. "They even had the heating on. It really was a luxury journey," Bruederle told a large crowd of journalists and photographers on a chilly Berlin morning."

...and this Green Car Reports article makes the interesting point that this long-distance record was set at 55 mph:

"Unlike the small Daihatsu which was heavily modified by a team in Japan earlier this year that achieved a massive 623 miles on a charge at around 27 mph, the Audi A2 modified by DBM Energy was able to achieve its 375 miles range at an average speed of 55 mph."

A lithium polymer battery is actually lithium-ion, but instead of the lithium salts being dissolved in a liquid solvent, they are trapped in a solid, dry plastic-like film - the polymer.

This has two advantages: 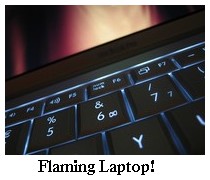 I think everyone's seen the videos of flaming laptops, right?

The plot of the "flaming laptop" videos is always about the same - someone wanting to demonstrate the dangerous nature of lithium batteries puts a cheap laptop on the grill and waits.

After it heats up, the battery starts to smoke...and the tension builds.

Pretty soon, a hissing spark shoots through the casing of the laptop, and then all hell breaks loose.

For a long time, lithium wasn't considered to be safe enough to put in a car. If you don't treat it right, it goes postal. Does it actually explode? Well, no. Not in any Hollywood-worthy sense of the word "explosion", but it certainly does burst into flame, which is alarming enough - and then the fire seems to spread from one end of the long, flat battery to the other.

Looks bad, but it's sort of just the nature of lithium. When lithium ion batteries are insulted - whether that insult comes from being barbecued, short-circuited, overcharged, pounded, dropped, or punctured with a nail - they tend to react strongly. First, the insulted cell begins to heat up, and as it does, the lithium chemical reaction begins to run faster and faster (as chemical reactions want to do when you add heat), which produces more heat and insults the surrounding cells, sending the chemical reaction running still faster...

Now, everyone has lithium batteries in their laptops, so you know the battery makers have figured out how to keep lithium under control. That's where battery management comes in...or some cases, DOESN'T.

Lynne: Lithium polymer chemistries have been getting a lot of attention lately. 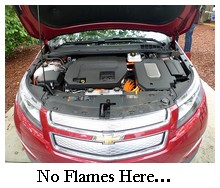 Mike: You mean a lot of bad attention, right? Like the three Chevy Volt fires, all battery related?

Wait, I thought the Volt used pouch li-ion? Not lithium polymer? Is it the same thing?

Same thing. Most polymer cells are of the pouch variety. But not all pouch cells are lithium polymer.

Oh. So you might hear "lithium ion polymer batteries" being used to describe the batteries in an OEM (like the Volt) but it's the same thing...?

Jack: I really would NOT classify either the Leaf, the Volt, the Fisker, or the TESLA as a Lithium Polymer battery.

Lithium Polymer GENERALLY refers to cells with a polymer vs liquid electrolyte. I think Toyota has done some research on solid polymer cells but nothing in a car.

Both Chevy Volt and Nissan Leaf use a Lithium Manganese Oxide Spinel cells. Nissan makes their own, and Chevrolet uses cells from Korean manufacturer LGChem.

Mike: LiFePO4 is super stable and some folks don't need even need a battery management system. It's more for insurance/backup.

For lithium polymer, on the other hand, battery management is an integral part of the system for managing voltage and temperature...

More from Mike and Jack on Battery Management Systems and Lithium Polymer Batteries.