Mitsubishi Electric Car: "i" as in iMiev 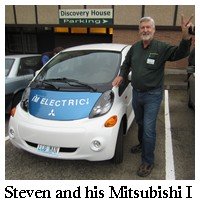 The new Mitsubishi electric car has a slightly awkward name, but otherwise it's very loveable! It started out as the "iMiev", back when it had wheel motors a few years ago as a concept vehicle...

...but Mitsubishi has since shortened the name to "i".

I caught up with Steven Lough (president of Seattle Electric Auto Association), who's got one of the first Mitsubishi "i"'s released, so I could ask him how he likes driving the new "i" (Steve has driven a LOT of different electric vehicles over the years!) and to ask what he's been doing with his cute little Mitsubishi electric car. Answer? Well...

Come on - ride along and listen in on the conversation!

Lynne: Hi, Steven! I know your new Mitsubishi "i" isn't your first EV. What other electric cars have you driven?

Steven: Well, there is hardly an electric car out there I have not driven...

Was it her looks, or her money? 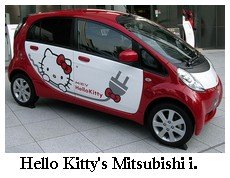 Having tried all the current EV possibilities, what made you decide on the Mitsubishi electric car? A new car represents a certain commitment.

So the Mitsubishi electric car cost less than the others, that's why you picked it?

Well, I could have bought a LEAF, or even a CODA, which have larger batteries, and a bit more ZOOM, but really, I just fell for the quirky look of the Mitsubishi i.


How does the Mitsubishi I compare with the Wheego Whip LiFe and the Smart ForTwo Electric in terms of handling and such?

The Wheego Whip LiFe is from a small company which may or may not make it in the long run. Mitsubishi will be around for a long long time. 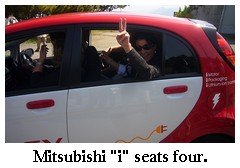 And the Smart ForTwo? It was just too small. We love taking other folks with us. The "I" (as I like to call it) comfortably holds four adults.

I was noticing, comparing the Mitsubishi electric car with a Corolla, size-wise, that it's a little smaller.

I would say it is closer to the Honda FIT in size and look, not the Corolla sedan.

Have they engineered the headroom/legroom well, so that it's comfortable for average sized people? Your drive-along partner from KUOW didn't mention it, so I'm guessing it's fine. Is this a car that a linebacker is going to be comfortable in?

A linebacker? Well, I would not go that far! But yes, the headroom is excellent. I am 6'2". 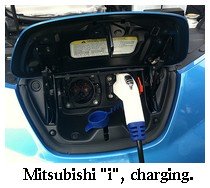 Have you got the level 3 charging package on your Mitsubishi electric car, or did you skip that option?

Yes it is an $900. option on the Standard "i" and Standard on the top-o-the-line which I went for.

Do you ever use public charging stations? If so, how often compared to home charging? (I noticed in the KUOW interview you said you mostly use the 110v.)

Yes, twice in the last 4 months - just the Level 2 type charger. Some of my friends have used the Level 3 and went from Seattle all the way to Wenatchee (Washington) over Stevens Pass on HW-9.

Is Puyallup the furthest you've driven it? That's like 30 miles or so, isn't it, and you charged up a bit when you were there? It doesn't sound like the range is badly affected by driving on the freeway, as you described it.

From our home in NE Seattle it was 40 miles out there, and 40 miles back. I did charge for a while there to give me the edge to come home without skimping on the freeway speed. Booked along at 65 and 70 just fine. You are correct, though; if you were trying to BEST the factory rating of 60+ miles, a modest 55 mph would probably do it. 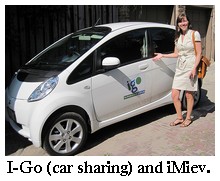 I figure that at boulevard speeds (35-40 mph) I could squeeze 70 miles out of one charge. And remember, no one says you can't get a little partial charge here, and a partial charge there...and before you know it, you have logged over a 100 miles in one day.

That's a very good point, a lot of folks don't realize that. 15 minutes of opportunity charging can put a lot of miles back into the "tank".

Do you use the AC, the heater, the stereo without worrying about how it affects the range?

Sure. The Mitsubishi electric car even comes with a key fob with which you can turn on the heater or the air conditioning from inside the house, while the car is still plugged in to the AC power.

I have bought a 220v (fast charging) unit, but so far, I am just using the simple 110v charger that comes with ALL the EV's out there now, free of charge.

Yes, the 110v is slow, but think of this way: Lets say you are a very busy person, and you are out driving 'round somewhere 3 hours a day. That's a LOT of miles!

Well, the car is sitting in your driveway 21 hours a day then. Right?

So even on a slow trickle 110 normal plug, when you get up in the morning she's FULL.

How does it handle hills?

On our trip out of town to Hood Canal for the 4th, there is a long fairly steep hill climbing out of Bremerton towards Belfair. A guy in a new SUV was kind of curious about the car (I have a sign on the back that says, "All Electric": ) So at something OVER 70 mph, uphill, he finally gave it up and fell off!

From our house to my cousin's beach house on the Hood Canal was just over 30 miles one way. Probably could have done the round trip, but we brought along our little 110v plug and filled UP, on their dime. 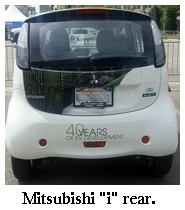 Yes it is. Well, that takes care of my questions. Any last thoughts before we wrap it up?

Here's what folks after about a week of ownership come to realize. And I cannot say it any better than what my friend Ed Begley Jr. said in the movie "Who Killed the Electric Car":

"What the detractors and critics of electric cars have been saying for years is TRUE. The electric vehicle is not for everybody. Given the limited range, it can only meet the needs of NINETY PERCENT of the population."