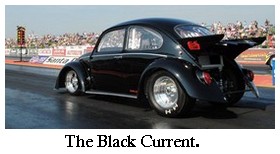 Part 2 of an interview with NEDRA president Mike Willmon. In part 1 of our NEDRA interview, we talked about the National Electric Drag Racing Association and what electric drive technology has brought to the world of drag racing. (Answer: Low-end torque. But I'll bet you already guessed that, huh?; )

Lynne: I saw the announcement from NEDRA a few days ago that the IHRA has just included a category for electric car racing. What is this going to mean for the sport? I read a little about the history of NEDRA over on the website, and I understand the NHRA didn't allow any electric drag racing until a couple of NEDRA guys lobbied them to change the rules in 1999.

Mike: If you go look into an NHRA Rule Book you will see a section on Electric Vehicles. This has helped our members who have wanted to run their vehicles at NHRA tracks. It has been a slow road since many NHRA tracks are used to seeing some pretty high powered competitions with gas and nitro-methane powered dragsters. The electrics have been relegated to pretty much an "exhibition" status. The problem we have had in the past, and I can speak from experience, is that there are a lot of folks that also run their cars at IHRA's tracks as well. Since IHRA did not have an official "Electric Vehicle" condition in their rules we have been running exclusively in an "exhibition" status. What this means for me, because my local track is an IHRA track, is that if I were to run and win in a local competition, I would not be qualified to run in a Regional or National Competition.

Can you explain more about "exhibition" status, and how that prevents you from competing in other types of racing?

Exhibition status is for a type of car that does not conform to an official class. There are rules for a Pro-Stock Car and for a Modified car under NHRA gas rules. If you have a car that really doesn't meet either of those guidelines you cannot compete in "Class" races against those two types of cars. You can run practice runs by yourself or against other cars that may or may not be close to your classification, but because it is not an official class you would be doing what is called an "exhibition run".

Usually when a track invites a jet car to run at their track on the 4th of July as a gimmick to get attendance out, and there are no other jet cars to run against him, that car will be doing what is called an exhibition.

Until EV's were accepted by the NHRA and now the IHRA, when we ran at those track, officially all we could do is run in exhibition. I actually bracket raced at my IHRA track before EV's were accepted in the IHRA rules, and I could win pay-out money from the local track because it was at the track owners discretion, but I could not qualify to move on to Regional, Divisional or National Championships.

Now that the IHRA has accepted electrics into their rules we will have a more official standing throughout the country to promote the future of electric vehicles. I am not saying that because we can now officially race at sanctioned drag racing tracks that electrics will be accepted, but I am saying that now because we are accepted at both NHRA and IHRA drag strips you will start seeing a surge of folks that understand the benefits of EDT. And just like the old saying goes, "What wins on Sunday sells on Monday". 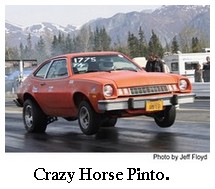 Let's talk about safety for a minute. What safety measures are particular to electric racing?

The NHRA adopted the NEDRA safety rules just as we published them, back in 1999.

NEDRA over its years of existence has come up with a comprehensive list of safety rules which were incorporated word for word into the NHRA rules for "Electric Vehicles" back in 1999. Now since the IHRA has accepted these rules into their rule book NEDRA has now become authority on the safety rules regarding electric dragsters. In these safety rules we include the things which are specific to electric vehicles in general. We recognize that drag racing has inherent risks and defer to the NHRA or IHRA for rules regarding crash worthiness.

All NEDRA members are required to adhere to the track sanctioning regulations (whether NHRA or IHRA or other) standards with regards to general and structural safety when on a sanctioned track.

A car is required to have a roll cage if it can do 10.5 second 1/4 mile, then our members have to meet that requirement.

Our members running electrics also have to meet electrical safety requirements that we impose like battery security and electrical disconnect standards.

Batteries in an electric vehicle must meet a 4G vertical and an 8G horizontal hold down capacity on their battery packs. This is the exact same requirement the NHRA an IHRA have on the starting batteries on their gas powered dragsters. While this is an easy requirement to meet with a 12 lb starting battery on a gas car it is a little more problematic for an electric with 850 lbs of batteries in their car. So it is important for the tech inspectors at NHRA and IHRA tracks to know what to look for with the new electrics taking the field. 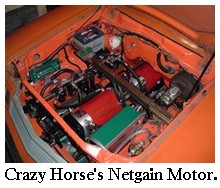 What motors are being used in electric drag racing? Do you have a favorite?

There is, so far, no doubt that series wound DC motors are the king of torque.

Off the line starting torque has been the defining factor for 1/4 mile dragsters. Whereas the zero RPM stall torque for a typical DC powered electric dragster is 5 to 10 times that of its equivalent gas powered dragster, the electric still suffers from a significant loss of torque at the top end of its RPM range where a gas powered dragster shines.

And AC motors don't have that top end loss of torque, I take it, but...

Right, there is an advantage though with AC powered motors that have a very large dynamic range but with a substantially lower starting torque. So it is still up in the air in the fight between DC powered and AC powered electric machines which is best.

I will say that of the 19+ records that NEDRA has recorded for the 2011 year, all of them have been set by DC powered machines. 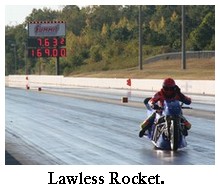 Brian Hall of Thunderstruck motors has been running his motorcycle named "Tron" for many years in the DMC class with AC powered motors and has several 1/4 mile and 1/8 mile class records in various voltage divisions. We also have some AC powered vehicles in the SC "Street Conversion" class such as the AC Propulsion eBox. We also have SP "Stock Production" class record holders that are AC powered such as the infamous GM EV-1 and the now more obtainable Tesla Roadsters. Some of these records are several years old, but they are still standing in their class.

Folks can see all of our records (there are a lot of them), as well as description of the Classes and Voltage Divisions at NEDRA's record holders page. 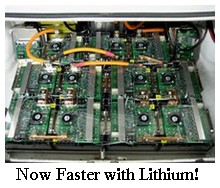 How has lithium changed the electric vehicle racing game, and when did that happen?

Lithium batteries are a godsend.

In general, lithium batteries are 1/3 of the weight and 1/4 of the volume of lead acid batteries. For a dragster that means dropping from an 850 lb. battery weight to a 250 lb. battery pack. That is a 600 lb. savings. In general a 100 lb. weight saving will gain you a 0.1 second time savings on your ET. So for drag racing that is a 0.6 second time savings on your 1/4 mile time. But the other benefit to lithium batteries is that they have a much higher power density than just the weight savings alone. They are able to keep their voltage sag to a smaller amount than their lead counterparts and therefor offer a power gain in addition to the weight savings. What most NEDRA racers that have converted from lead acid batteries to lithium-ion have found is a 1.0 to 1.5 second shaving off their 1/4 mile ETs.

What lithium chemistry are people using in their electric race vehicles? Can you talk a little about that?

Lithium Iron Phosphate (LiFePO4) chemistry is proving to be the most stable as far as a daily driver type EV.

So that being said, there are lithium polymer batteries - the polymer is usually a trade secret of the manufacturer - that have much higher power densities that are required for drag racing.

Whereas the LiFePO4 chemistry would be better for a longer range vehicle, the Li-Po cells are seeming to be the desire of the electric dragsters that need not much more than a couple mile range. Still, NEDRA does have a member racer that turns a 10.258 second 1/4 mile time with Li-Po batteries that can still achieve over a 120 mile range.