I'm talking with Mike Willmon, president of NEDRA - the National Electric Drag Racing Association. In this part, we'll talk a little about drag racing (found out it's not as simple as it looks!) and what - and who! - electric drive technology has brought to the sport.

Electric drag racing in a nutshell?

Good thing there's nothing coming out of my tailpipe...

...because you'll be seeing a LOT of it. 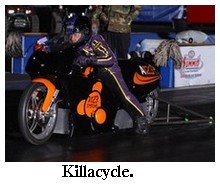 Lynne: Hi, Mike! So you're the current president, is that right? Can you tell me a little about what NEDRA does?

Mike: The National Electric Drag Racing Association is a specialized chapter of the Electric Auto Association. If you want, you can read more on that at the NEDRA website.

To me I think NEDRA is the core group of folks helping to bring the future of Electric Drive Technology.

Its all nice and good to see souped up go carts being put to the streets, but until folks see that electric vehicles have all of the benefits over their gas counterparts then they will not be accepted. I have been showing my electrics for over 7 years now and the top two question I get asked are (in order of appearance) are "How fast will it go" and "how far will it go"... in that order, period. From what I have heard from folks that's all they want to know before they are sold. So NEDRA has been dispelling the myth that electrics are slow for 15 years now.

I was elected President 3 years ago and I am happy to report that now the IHRA has accepted electrics into their rule book such as the NHRA had done back in 1999. And also within the NHRA the Electric Junior Dragsters are now allowed to participate alongside their gas powered counterparts in competition. We have many members who are pushing the envelope on EV performance not only in 1/4 mile acceleration competitions, but also Land Speed Racing as well as their distance capabilities. From what I've seen from our members they are all about showing the all around benefits of EDT. 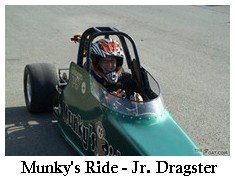 What is electric drag racing, anyway? Is that just going like a bat out of hell for a short distance, say, a quarter mile?

Yes! You put your foot to the floor and see how fast your car (or bike) can accelerate to the end of the 1/4 mile. That's the race!

Zero to sixty times seem to be a big deal with sports cars, I've noticed.

Right. Most folks judge the sports car they buy on how fast it will do a 0-60 mph time. 0-60 mph times are an "initial" indication of how well a car will perform. But drag racing takes it a little bit further.

By the way? Look at some of the 0-60 mph times of electrics and it will blow your mind from what you will see from standard sports cars you see in the dealer lots. 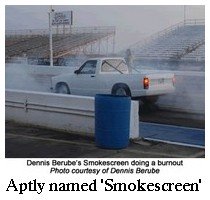 I must say that driving a drag racer doesn't look all that difficult.

There is a little bit of skill involved on knowing when to mash the pedal when the light turns green, knowing how much pressure to run in your tires to keep traction, knowing how to balance your car to take off most efficiently, and knowing what your limits are so you don't blow the car up.

Electrics have so many benefits in the art of "Drag Racing" but I will not go into them here except to say that you do not need to worry about atmospherics, or timing, or air fuel ratios, or exhaust tuning.... etc. There are however other things that you must pay attention to, but they are not things that affect the car from run to run if you have built your car correctly.

Those Wacky NEDRA Acronyms, and a Drag Racing Tutorial

I popped over to the NHRA website for a little drag racing education. I wasn't sure what ET was, though fairly sure it didn't have anything to do with extra-terrestrials. And it turns out to mean "elapsed time". I gather.

That's it, or there's more to it than that? Why not just say "time" instead? Is this perhaps one of those sports terms invented by men to bewilder women?

There is another time that is called Reaction Time which is the time from when the light turns green until all the synaptic processes happen to tell your brain to tell your foot to hit the pedal and your car breaks the starting line. Imagine a light turning green and you take 10 seconds to get it in gear and hit the pedal, then your car takes off and in 10 seconds goes from the start of the 1/4 mile to the finish.

You may have had a 1/4 mile elapsed time of 10 seconds, but when added to the 10 seconds it took for you to hit the pedal you would then have a racing time of 20 seconds and you would have lost the race. The ET is purely a measure of performance of the car that actual time it leaves the starting line to the time it hits the finish line. But in drag racing having the quickest car may not actually make you the winner depending on your reaction time as a driver. 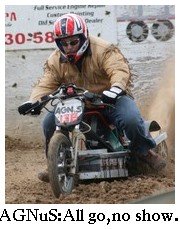 Quickest car? What's the difference between quick and fast? Fast is speed, quick is acceleration?

You got it right.

Faster refers to the "Trap Speed" or the speed the car is travelling when it crosses the finish line. A car that is faster is, well, faster. But the faster car does not always win a race. To win a drag race you have to be quicker. Quicker is the measure of acceleration. If I could instantly accelerate to 60 mph then it would take me 15 seconds to travel a 1/4 mile. A car in the other lane may accelerate slowly off the line and get up to 90 mph and finish in 15.1 seconds. The 90 mph car is faster, but it won't win because the slower 60 mph car was quicker to finish. Drag racing is an acceleration contest. Land Speed Racing is a top speed contest.

I'm wondering about "bracket racing" and "dial in" times. How does a drag racer choose their dial in time? What factors go into that choice?

Dial in time is your guess on what you car will run.

Bracket racing is a handicap system that lets faster and quicker cars compete against slower and (opposite of quicker) cars. In a bracket race I would guess my car would run 13.0 seconds and another racer might guess his car will run 10.0 seconds. Once those "Dial-Ins" are entered into the starting computer the lights will stagger the start and let the (not as quick) car leave first, by the difference in the dial ins, 3.0 seconds. So I leave 3 seconds early, and the 10 second car delayed by 3 seconds and we should both finish in 13 seconds total at the same time, at the finish line. The winner is determined by the first to cross the finish line. There is strategy involved but the trick is you cannot run quicker than your dial-in. If you go quicker then you automatically lose. This keeps you from sandbagging. Meaning the 10 second car guy dials 13 seconds so we leave at the same time and he finishes in 10 seconds, 3 seconds before me. That is not fair. You have to get as close to your dial as you can without going under, and get to the finish line first, then you win. 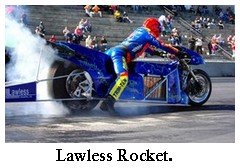 Are professional race drivers being attracted to the electric side of the sport?

Scotty Pollacheck and Larry "Spiderman" McBride are two professional Pro-Stock gas bike riders that are also riding the two fastest Electric bikes in the world, the "Killacycle" and the "Lawless Rocket" bike. I would venture that Tim Brehm is the fastest amateur driver of an all electric street legal drag racer in the whole world.

Would you rather go far than fast? Check out this article about hypermiling in your electric car.

Go to part 2 of our NEDRA interview.