Lynne: I hope the leaking electrolyte from your nickel cadmium batteries isn't full of cadmium! I've heard that's bad for you, or bad for the environment, or something...but guess I don't know anything specific about it. Will the electrolyte hurt you if you touch it?

Jack: Yes, cadmium is definitely bad for you but it stays in the batteries. The electrolyte is KOH, a base, not an acid, plus other chemicals. The batteries give off hydrogen and oxygen which turns into water. I assume the battery electrolyte will burn you just like an acid will but I have not tried it nor do I want to. I treat it like battery acid. I neutralize the acid in lead acid batteries with a little baking soda so I thought vinegar (a weak acid) would work for the KOH in the ni-cads but it does't bubble or fizz like when you neutralize the stuff on top of lead acid batteries.

I have put my fingers in the water like stuff that comes out when I overcharge. At first it was unintentional and I quickly neutralized (I thought) with vinegar. But then I did it more, accidentally, and it didn't hurt or put holes in your cloths. I rinsed it off quickly. 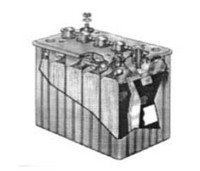 Comment from Bill Brinsmead: The electrolyte is KOH at 1.300 specific gravity (translation: not very concentrated). Caustic yes, but not nearly as big a safety and corrosion hazard as sulphuric acid. It does not hurt blue jeans! Will eventually irritate skin if not washed off, really bad if in eyes.

There are some types of fabric you don't want to spill this stuff on. For example, some kinds of synthetic carpet will sort of melt, it melts a hole in it when you splash a little KOH battery fluid on it. It turns tarry black and gooey around the spot. Rayon or spandex biker shorts are the same way. I'm working on an electric hearse right now, and I'm carpeting the inside. I'm going to check the carpet to make sure it doesn't react to KOH because you never know when you might spill some when you're filling the batteries.

Another important point from the Saft manual: Keep the battery compartment well ventilated.

...because it vents hydrogen and oxygen gas, right.

Hey, isn't there a gizmo that encourages those gases to get together and become water? Does that work on Saft batteries, too?

Note from David Roden's secret Ni-cad page: ) "...the STM5-MR monoblocks...use a recombination catalyst similar to that employed in valve-regulated lead batteries. This catalyst, a bit of platinum in each cell, prompts the recombination of hydrogen and oxygen back into water."

Here's something else...I found this at Wikipedia. It says that with ni-cad batteries "...the negative electrode is always designed for a higher capacity than the positive, to avoid releasing hydrogen gas." So when they overcharge they won't release much hydrogen gas anyway.

But doesn't hydrogen in the presense of oxygen automatically combine to make water?

Answer: Not right away. Becoming water is like getting married. The gases want to be single and get in lots of trouble first. Doesn't everybody?

Check out the H2 and O2 getting in trouble...


Hydrogen gas by itself is exciting in a balloon popped by "candle on a stick", but with oxygen mixed in (especially thrilling at 2:1 ratio, twice as much H2 as O2) and lit up, it makes a HUGE explosion. Needless to say, we try to avoid any sort of balloon-popping excitement in our EV battery compartments.

Aaaand that's why we don't let you light up while we're charging the car.

Go to the beginning of Nickel Cadmium Batteries for Electric Cars