Can nickel cadmium batteries be used in electric vehicles?

Here in the United States, we don't use ni-cads much in our EVs because the building materials are so toxic that they can't ever be landfilled, and they're really expensive to buy new here because of the regulations. But on the other hand, ni-cads make great EV batteries - some folks think that they make even better EV batteries than lithium.

So with all that in mind, I found some very smart EV converters who have been using Saft STM-180 nickel cadmium batteries that they salvaged from used electric buses and vans.

Scavenging old batteries keeps them out of the landfill, and most of those old Saft batteries have another several thousand miles on them before they're really used up.

Jack McKee converted a 1980 Volkswagen pickup using nickel cadmium batteries, and we asked him about the process and how it turned out.

Bill Brinsmead has done several conversions using reclaimed nickel cadmium batteries and has worked out some "best practices" if you're going to use them yourself, and shared his observations with us. 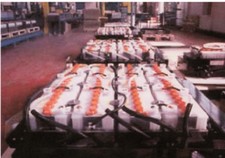 Lynne: Hi, Jack. Tell me a little about the Saft STM-180 batteries you're using in your VW pickup conversion.

Jack: My nickel cadmium batteries have been great, better than lead acid, but they do have issues.

I got my Saft STM 180's used from a bus that had about 100 of them. Some were in the Chrysler TE vans, too. They weigh 51 lbs. I found the manual on the EVA web site which was fortunate.

I used to have Crown 225 lead-acid batteries in my truck.

When I got the chance to get the nickel cadmium batteries, I first saw they were 180 amp hours and was disappointed. Then I looked closer and saw 180 amp hours was the 1 hour rate. The one hour rate for my Crowns was 98 amp hours. So, theoretically anyway, to compare the batteries 98 X 72 is 7056 watt hours available with lead acid and 180 X 78 is 14000 with nicads. Almost twice as much. I'm not getting 14000 kwh from them now and I'm sure part of it is because I'm not charging them right. But it also might be that they might have been on the downhill slide anyway.

Nicads were state of the art batteries all through the 1990's. They were used in quite a few vehicles in France, some reporting 60 or so miles. In one advertisment brochure Saft claimed 100,000-200,000 KM for battery life. It may all be moot now with lithium coming on line but if you are on a budget and can get them cheap (new they were $650 per battery) and you don't mind fooling around a bit they'd be worth checking out. I recently saw an advertisment for a bus that had 104 Saft STM 180's.

Comment from Bill Brinsmead: That's how I got mine, too. They're cheap when you get them used. Also you can recycle them at the end of their life and get money for the scrap. I wouldn't pay to get rid of them, I'd let somebody pay you. Saft takes them back, too, to refurbish them. I don't know how that works exactly because I don't do that, and I can tell you they're a real pain to take apart! So I'm thinking they must do it without taking them apart, but I don't know.

Preparing the used nickel cadmium batteries for use

More from Bill Brinsmead: What I do is, when I get a new (to me) set of the STM-180s from an old electric bus or wherever, I start them all fresh. Some of them are discharged when I get them, and some are not. So the first thing you do with these (6v) batteries is put together a balanced pack.

Here's how you do it: 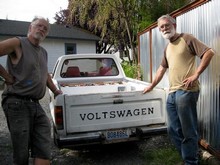 Jack: You can drain ni-cads down to nothing every once in a while and it doesn't hurt them.

The manual says you can even reverse a cell once in a while, just don't do it very often. You can store them for years and then charge them up and use them. Just sitting doesn't hurt. The ones I got hadn't been used for at least 5 years and most of them still had 5 volts. You can charge them incredibly fast, if you have the right charger. Saft rebuilds them, or use to. They also take them back for recycling. Saft claims 2000-3000 cycles. Not as finicky about charging as lithium.

Aren't you actually supposed to drain Ni-cads down to nothing every once in a while, because of the memory effect? I got this from the Arizona Solar pdf document on the principles of Ni-cad batteries that's over at the EVDL library.

The memory effect, according to the saft STM-180 battery manual...

"...reduces the time of discharge at a given rate to a predetermined voltage. The effect is brought about by repeated cycles of less than full capacity." Not really true?

Comment from Bill Brinsmead: I think that's a myth. At least, I haven't noticed it, and I use these Saft STM-180s a lot. Maybe it was a problem with the kind that are sealed, but with the ni-cads you put water in, like these, I haven't seen memory effect.

Great! Thank you all very much, this has been really helpful.