This Nissan LEAF Runs on Sunshine! 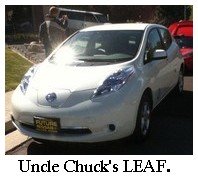 This is part two of our interview with Chuck Swackhammer (AKA Uncle Chuck: ) talking about his Nissan LEAF.

In this segment, he talks a little bit about his rooftop solar array - where he got it, how much it cost, and installing it himself. You can read part one here, where I ask him about range anxiety. (Spoiler: he's not the anxious type.)

Nissan LEAF in the garage, solar panels on the roof.

Chuck: Last spring I put 3 kw of solar panels on my roof and I'm hoping to add 3 kw more this summer.

I was getting a little worried about my electricity bill last month because...

Lynne: Right?...sounds like you've been using a ton of electricity lately.

Let's see: Your Nissan LEAF that I hear you've put a LOT of miles on this month...

That's a lot of miles, though! And cutting up a big 100 foot pine tree with an electric chainsaw in your front yard, did you say, and whatever else...

Right, my house is all electric and with all the cutting and splitting, shampooing carpets, running an evaporative cooler and driving 1500 miles in my Nissan LEAF I didn't know what to expect in the way of an electric bill. 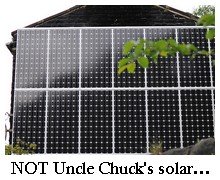 A 3kw array does all that stuff? That IS pretty cool. It sounds like once you get the additional solar panels up, even with the added electric use of driving your new Nissan Leaf around, you'll be completely self-sufficient. You might even have juice to spare at the end of the month.

When I get my other 3 kw array up, I'll never have a bill again.


Install it yourself? Sure you can!

That's just stunning to me, the idea that I could run my new Nissan LEAF exclusively on electricity produced on my own roof. 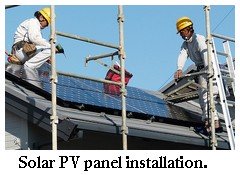 I know a lot of people want that sort of "personal energy independence", but they think that setting up a solar array is too expensive or too hard or whatever.

I was really surprised to find out how cheap solar panels have become especially with the federal 30% tax credit and power company rebates. That is if you buy the stuff and put it in yourself. The contractors charge too much. I bought the "kit" from Wholesale Solar, and just did it myself; the work's not too hard.

That was my next question. Were the solar panels difficult to install?

No, as a matter of fact, they were downright easy to install.

Do you have the...what's it called, the smart grid, where you're at, so you can sell electricity back to the company when you get your additional 3kw array set up?

Yeah. I'm still tied to the grid and that's a good thing. They act as my battery. When my panels aren't producing (at night or bad weather) I buy power from the grid. During the day in good weather I sell it back to them at the same rate. If I over produce, they will carry it over from month to month so during the winter months I can run on my built up summer surplus.

Can you say a little more about the incentives and tax credits you can get for putting a solar array on your house?

Well, I fell through the cracks as far as incentives. I did get the 30% federal tax credit, but not the power company rebate because I was buying my power from Nevada and they don't offer a rebate to their "California customers".

Still, it wasn't as expensive as most people seem to think. I got a 3 Kw array for $6000. You would probably only have to pay $3000 after incentives. When you consider that they produce about $100 worth of spark-tricity a month for the next 25 years all you have to do is a little math and you'll see what I mean.

So, if you figure the electricity to run an electric car in there - as well as just your regular power bill...

...which in my case includes heat, air conditioning, whatever, and endlessly recharging ALL my computer-driven gadgets!

...it just makes way too much sense not to do it. 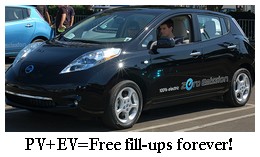 When I replaced my roof with a reflective color (white) and put up my solar panels I got a big tax refund. The next year I bought another 3kw array (not up yet) I got another really big tax refund!

What you get back depends on your own tax situation, of course.

I was thinking, and I think a lot of other people were thinking, that it's more difficult or more expensive than it actually is, to get solar panels on the roof now. Let's all just go DO it, and drive our electric cars on sunshine!