Nissan LEAF With No Range Anxiety

The Nissan LEAF has been getting into the news, and into people's driveways, for a while now. It's a fully electric car with 100 miles (or so) of range, all the usual new car stuff, and freeway speeds. The car magazine reporters that have driven the Nissan Leaf really like it, they say universally that it's really fun to drive and handles very well, but they all seem to complain about the range and the recharging times.

So I thought it would be fun to talk to a new Nissan Leaf owner who was already quite used to driving electric vehicles, to see if electric car drivers might have a different perspective from the automotive magazine folks. Turns out they do.

My Uncle Chuck (Electric Auto Association of Northern Nevada) got a Nissan LEAF as soon as they built it, updated to the newer model when it came out, and is a devoted LEAF fan, so I thought he'd be the perfect person to give me a little EV perspective on Nissan's electric car...and I thought you might like to listen in on the conversation. 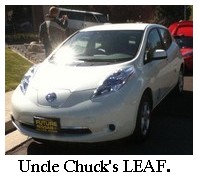 Lynne: Nice car! What color is your LEAF, by the way?

Glacier. Global warming. I get it. So what's all this talk I hear about "range anxiety"? Do you get that, too?

I can honestly say that I don't ever have range anxiety. The range does fluctuate based on how you drive, but it's no different with a gas powered car.

I did charge to 100% for about the first 2,000 miles until I got a good feel for where my boundaries are. Then I realized there was no more need to charge at 100% because I always had plenty of range for the driving I do, and trust me I do a lot of driving but it's all pretty local. I live 10 miles from the nearest store so every trip is over 20 miles. 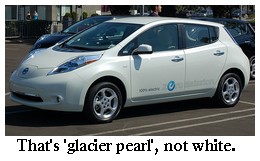 I've heard that you can take off with 100 mile range according to the dashboard readout, and then go 3 actual miles, but the readout says you've got like 70 miles left.

Most of the confusion in the computer calculated range is that it constantly recalculates available range based on whether your going fast or slow or up or down hill. It figures that say your presently going up a two mile grade that your range based on that climb until your batteries are depleted. (It doesn't know it's only for two miles.) As soon as you reach the top and go down the other side it recalculates based on the down hill and your range goes back up again. You just have to understand how it thinks and you will get that light bulb moment and not worry.

I'm wondering if the people you've met who are thrilled with their LEAFs (Leaves?) have mostly been from the EV community, people who don't have unrealistic expectations and are used to electric car driving? 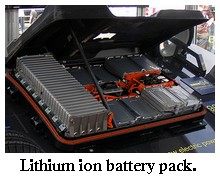 The people that normally drive freeways at 65 to 75 mph aren't going to get the same range as those who go at a more moderate pace. I think some people have unrealistic expectations and think the stated range is always supposed to be 100 miles. Some people are just not happy anyway and like to bash what they don't understand.

What I was thinking when I read the automotive magazine guys trashing the Leaf's range was something like, "it's not the Leaf, it's you." Meaning, it takes a while to figure things out and change your driving and refueling habits.

Do you drive your Nissan Leaf to work, and charge it there? I thought I remembered that you live quite a ways from town, up on top of a hill! What I'm getting at is, home would be pretty far out of the way for opportunity charging if you weren't pretty comfortable with the range!

I haven't been charging at work because the range on the Leaf is huge!

I can go to work or shop in town and then go to work or anything else I want and still have plenty of range to spare, and I'm only charging to 80% most of the time, unless I want to go really far then I charge it to 100%. I do live high up in the Sierra mountains at about 5,000 ft. and I work in Sparks NV which is at 4,500 ft. So it's down hill to work and up hill back.
There is a Coulomb Charge Point in Reno at a bagel shop, but I've only been there once and plugged in, but that was just for grins. 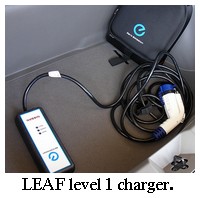 Is the range improving as the drive train gets broken in? I think this is a major departure from gas-guzzlers, that a "new" car isn't best. We like our nice new car smell, but I expect we'll be happier with them as they get a few more thousand miles on them.

The drive train is different from the ICE cars in that there really isn't much to wear or "break in". There are two bearings on the motor and a few in speed reduction gear box, but that's pretty much it. Solid state stuff doesn't "wear". This battery chemistry does eventually degrade, they figure about 20% over 100,000 miles, again depending on how they're treated. If you use the quick charge feature very often and always charge to 100% then it will probably degrade sooner. I didn't get the quick charge feature because I've been driving electrics long enough to know that I'll probably never need it. 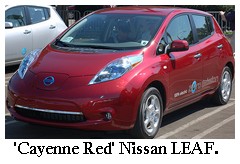 Did you get your Leaf in Nevada, or California? I know you live close to the border of the two states.

I bought my Leaf in Roseville, California. They didn't sell them in Nevada until Jan 1st of 2012.

The EV tax credit is simply something you claim when you do your taxes the following year. It's a dollar for dollar deal so if you have to pay say $8,000 in taxes they reduce your liability to $500. Most of us have already paid that money in during the year so your refund will be much bigger!

Read more about this Nissan Leaf that runs on sunshine.