Plug-in Hybrids is a book, written by Sherry Boschert, and it's also a dream car - all the electricity, none of the range anxiety - brought to life by electric car activists with wrenches.

Now, after the groundbreaking work of these CalCar activists, we have the option of buying PHEVs from the major automakers, having our Priuses and Insights converted to plug in, or you can even Build Your Own Plug-in Hybrid Electric Vehicle, thanks to a how-to book by Seth Leitman.

The Button: A little Plug-in History

When the 2004 Toyota Prius was released, and people managed to get one and take it home (these cars flew off the shelves, so to speak. Laying hands on one wasn't all that easy), they noticed a mysterious button on the dashboard that didn't seem to be attached to anything.

The dealerships didn't know anything about it.

So what's a Prius owner gonna do with a question nobody could answer? Go to the Internet, of course.

They quickly discovered that, except in America, pushing the mystery button allows you to drive your car entirely in "electric" mode. American Priuses didn't have this option, (and the picture you see here is of a "non-US" model) because supposedly you could cheat on your emissions test if you hit the switch and kill the gas engine. (Please. If you hit the switch and the engine died, the car proctologist could TELL from the lack of engine noise: end of test. Besides, what PRIUS is going to fail an emissions test, for heaven's sake? American Priuses didn't have the electric-only option because the American auto/oil industry lobbyists wouldn't have it.)

A couple of months later, some enterprising Texan engineer managed to reconnect the EV button on his Prius. Neat! Now, for short trips, he didn't have to use the gas motor at all, or if stuck in traffic or whatever. The gas engine recharged the batteries when it switched over. 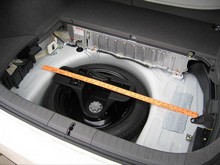 About that same time, people started noticing how much space was available in that Prius for extra batteries. Our intrepid engineer found out he could get 50-some mpg by adding another battery. And then some of those past and present electric car drivers from CalCars and Plug-in America started asking themselves: What would happen if you just step over the line and, well, CONVERT the car to electric-optional drive, with PLENTY of battery like you really mean to drive a little without gas...

...and have the option of PLUGGING IN your Prius, just like an all-electric car?

Well. I guess you can have it all.

The idea was pretty seductive.

The best part, the irresistible part, is that your range could then be very flexible. If you find yourself driving around town, then you could stick with "electric drive", and save yourself a bundle - not to mention saving a bundle of nasty carbon emissions and pollution, too!

But if you've used your batteries up and you've still got 75 miles to go...

...no problem! Now you can just continue your journey in a reasonably fuel-efficient gas-guzzler. Um, gas-sipper, rather. 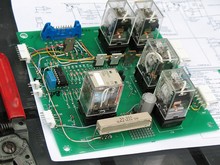 Okay, maybe there was just ONE little problem.

The car won't LET you convert it, not without hacking the "brain".

Maybe I should say it COULD have been a problem, except that the people who tend to buy hybrids also tend to be the kind of people who might just be able to rewrite code...

...and it wasn't too long before that little problem was no longer a problem!

That small group of folks from CalCars and Plug-in America put down their pens and marching shoes for a minute and got to work building that plug-in Prius. That story alone is worth the price of the book.

There were lots of ups and downs, or it wouldn't be a story. In the end, they got the car built, and the mileage was as good as they'd anticipated; in fact, with some electric car driving skills, they did even better.

Now this sounds like the car that will convert all of us to electric, doesn't it?

The good news is that you can have a plug-in Prius today. It's called the Prius Prime, it's widely available in 2018, and you can see more about it in the video below.

Plug-in Hybrids is a really good book, and if you haven't read it, I highly recommend that you find a copy - it's worth your money.

There's inside scoop from the people and events that brought you "Who Killed the Electric Car?", too. If the movie left you wanting to know the people a little better, you can find more about them in the book.

Good news for those who want to build their own plug-in hybrid! There's a MANUAL for it called Build Your Own Plug-in Hybrid Electric Vehicle. Chapter 10 "...goes through the conversion process step by step with the assistance of a few conversion specialists." (p. 165)

"When you do it yourself," the book goes on to say, "any choice you wish to make for more speed, acceleration, or range is readily accommodated."

A word about the hybrid's warranty: It doesn't void the entire warranty to add batteries and plug in.

At the most, Mr. Leitman says, the mods will affect only the warranties specific pieces of the drivetrain you actually change when you convert: "...there is legal precedent for the conclusion that original auto warranties cannot be voided completely by modifications....typically, hybrid cars have four or five separate warranties." (p. 223)

Plug-in Hybrids from the Majors

There are lots of plug-in hybrid choices now (2018), and I've decided I am ALL FOR THEM. (No EV purist here!) There's the Chevy Volt, the Prius Prime...well, you can see the new lineup on the video below.


Back to Hybrid Electric Cars.