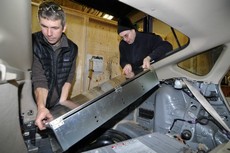 You can find Part 1 of the Plug in Prius interview with Andrew Bell here.

You're planning on going to all-electric in the future, and getting solar panels (cheers to that, btw!). Are you planning to get a different vehicle for that, or use the Prius?

Well, I think I will be hanging on to the PHEV Prius for a while yet. I've only got about another year to go for the conversion to pay for itself had I kept my old truck on the road. After that those savings would go towards paying for the solar array system to offset the charging of the PHEV system plus the energy demands of our house. It is pleasing to see the auto manufactures now feel they have to compete with each other in terms of electric cars after most of them said no one wants them. It would probably be another three years or so before I go full electric and will be very interesting to see what is on the market them. If there is not something that I like a gas to full EV conversion may be on the cards too.

I'm wondering how modifications to your Prius have affected things like warranties - I think people are worried about that. I don't know if you had financing for your Prius at the time you modified it, but if so, was that something that was affected by the conversion? (sorry to be nosy; )

The Magneson-Moss Warranty Act prohibits Toyota from voiding my warranty unless they can show that the PHEV conversion damaged my car. It is highly unlikely that the Enginer kit would affect the original design of the vehicle because the interface is simple and far less intrusive than other PHEV technologies. I love what other PHEV technologies are able to accomplish but invalidating the Toyota warranty wasn't going to work for me, even less so with my wife if something "bad" happened!

There was only a $6000 difference between the Prius and sale of my truck so it was just tacked on our existing line of credit which has a very low interest rate.

How much weight did the modification add to the Prius? Does it affect handling at all?

The Enginer PHEV system weighs about 180 pounds so it like having a full sized adult stuffed in the back of my car. This is a great benefit for our long Alberta winters! It adds better traction in the snow and icy road conditions. 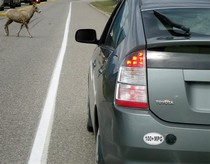 Andrew, tell me about the Prius-and-goat picture. I'll bet there's a story there!

The goat picture was taken in Jasper National Park last summer during a camping trip. They didn't hug me like the Nissan LEAF polar bear though....; )

The neat thing was that I could charge up the PHEV system at our campsite and drive up to the wildlife in EV mode, as you have to slow right down when wildlife are spotted; they didn't seem as skittish with the silent Prius.

Really?? That is so cool about being able to charge your car and use it in EV mode and not scare the animals.

You have the option to drive your car in 100% electric mode, then? How much range do you have with no gas at all? What happens at the end of the range if you don't switch your car out of EV mode?

The best way I like to describe the capability of the system is as to what level of torque is placed upon the car. if it is under a certain point (flat ground, slightly downhill and under 60km/h) I can usually get it into 100% EV. Under these driving conditions I could theoretically get 20 miles on EV. In real world driving conditions though this has yet to happen.

I am rather suspicious of Toyota claiming 15 miles in pure EV with the 2012 PHEV. using the synergy drive system I have yet to see this done on any review videos that I have seen. I hope that I am wrong, but If this not truly possible with their new car then this makes me feel even better spending 10K to have a PHEV and not over 40K for the 2012 Prius PHEV.

Once the energy has been depleted from the Enginer system then my car is just a normal hybrid. This is a great feature of this setup, it's not invasive, it could be taken out, kept and just sell the Prius as a normal Prius Hybrid if I wanted to. The other thing I appreciate about the system that has come to light lately in respect to the Tesla 'bricking' situation. Both the Toyota Synergy Drive system and Enginer have a self preservation backup and will not allow me to fully drain the batteries.

(Editor's Note: In 2018, this is no longer an issue in either the Prius - total EV mode is perfectly routine - or the Tesla - the battery brick days are behind us. Progress!)

Thank you for taking the time to talk with us about your plug-in Prius, it's really cool.

Thank you, Lynne, for giving me this opportunity to share my story!

Go to Part 1 of Plug in Prius