Andrew Bell from Edmonton used to have a big gas-guzzling truck - a 2002 Dodge Dakota. When he didn't need a truck anymore, he noticed that he was spending a lot of money in gas driving it back and forth. So...

After 9 months, he thought: This is great, but I'll bet I could do even better. So with the money he saved, he drove his Prius to Electric Autosports in Vancouver and had an Enginer plug-in kit installed. Now his Prius gets 75 to 100 mpg and can run silently in EV mode under lower torque loads.

Here's the best part: The conversion - all parts and labor included - only cost Andrew about 4K.

He's planning a full electric car next, fueled by solar panels on the roof of his house.

Interview With This Happy Plug in Prius Owner

I love the progression you made from truck -> Prius -> plug-in Prius -> 100% electric car and solar panels in the future...in small, do-able steps. Sure beats turning it over in your mind, as the saying goes!

Yes, this was a realistic option for me - buying used and focusing on a system that would give me a near net results as other higher costing systems. There are lots of other things I would like to have, such as a Net Zero energy home but I do not have same income level as those who own them here in town. Just do what I can for my own self satisfaction and being a good leading example to my wife and three young children.


You've got LiFePO4 batteries in your plug in Prius? I'm interested in those. What can you tell me about them? Do you know what brand they are, voltage, AH?

The Enginer lithium-ion batteries are Real Force 8F80AH batteries. In each pack (my system has two) there are four 3.2V cells in series at 80 amp hours, with a maximum continuous discharge of 160 amps. Which would work out at 2KWh. It weighs 50lbs which is 1/3 of that of a lead acid battery equivalent. The expected life cycle at 2000 full discharges. At 70% discharges the batteries are expected to last over 3000 cycles. So far I am averaging a 60% discharge on my work day commute so theoretically that should last 3500 charges. The "brass tacks" of this is that they should last my driving needs for over 13 years. At the end of its life I could still use it for storing energy for other applications or look into having them rebuilt or have it safely recycled. 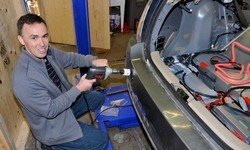 I thought it was cool that Electric Autosports let you drill the hole for the plug. Did you do anything else on the conversion?

Not too much other than being an extra pair of hands when it was handy. Such as passing tools, and unfastening body work. Basically I tried to stay out of their way, but ask questions at the same time to understand as much as I could.

How long did the conversion take? You had to drive from Edmonton, so I'm thinking less than a weekend, right?

The conversion took a full day and it took a full day to drive to Vancouver each way. I had a day spare to take in the Vancouver Auto Show. At this stage I had never seen an electric car in the flesh before so to see and sit in most of the ones I had seen on the internet was very cool for me. I was like a 6 year old Christmas morning!

Did you know your insurance rates would drop when you switched from the truck to the Prius, or was that a nice surprise? I'm sort of surprised because of the difference in the value of the vehicles. I'd expect the Prius to be more to insure, it being newer and more valuable. Hm. Any thoughts on that?

I thought the insurance rates would be about the same so to have it dramatically reduced was a nice surprise. It is a premium to insure trucks and SUVs up here in Alberta. Insurance rates jump up dramatically between 2WD and 4WD for example. I think the fact that there was only one year difference between my truck and the prius helped out on that. Had the Prius been a 2010 or newer I am sure the rates would have been more.

Go to Part 2 of Plug in Prius