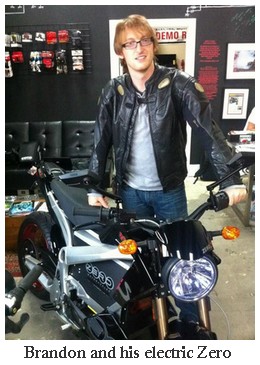 Brandon has both the street version of the Zero called the S, and then a electric racing motorcycle model called the ZF6, lighter and better for racing. 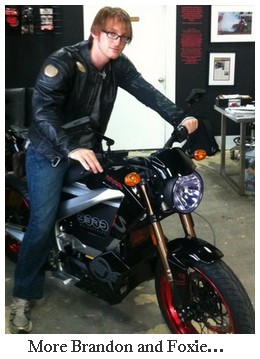 Lynne: Hi, Brandon. I'm looking at your pictures, and is that the Zero S model you're riding?

Brandon: Yes, that's a Zero S. I have owned a Zero S from each year of production since they first came out.

Is that the one you race?

I recently got a new 2012 ZF6 from Hollywood Electrics for racing. The ZF6 is the smaller of the current Zero S models with only 2/3 the battery of the ZF9, but about 45 lbs. lighter and so better for racing - not to mention 6 kwh is plenty for racing and commuting. I only commute about 50 miles through the canyons so the ZF6 is perfect with a maximum range of 75 miles (versus the ZF9's 114 mile range); however, one of my friends did take a ZF9 out on a 140 mile trip!

It's a little hard for me to tell the difference between the S, the X, MX, etc. What made you choose one over the other?

If you have a look at them on Zero's website, you will be able to see some aesthetic differences and read more about the performance differences as well.

I'm not that familiar with the dirt models, the X and MX but what I do know is that the X is a dirt bike legal both on and off road while the MX is an offroad only dirtbike. Both of them have amazing performance and everyone I have met that rides or races them loves the way they handle and perform with instant torque especially in situations where gas bikes can provide some interesting challenges.

I am more familiar with the DS and XU models than I am the dirtbike.


The DS would perhaps be considered the enduro of the electric motorcycle world giving both great on road performance as well as great performance and handling off road with excellent power delivery whenever you want it. It has higher suspension, semi knobby tires, and like the rest of the street models, both an eco and sport mode allowing hard riding or distance riding with the ability to recoup some of the battery with regenerative braking/deceleration. The XU is basically a toned down version of the S with a smaller battery pack and somewhat less power, it is a perfect commuter/around town bike for people just looking to get around quickly and easily.

My real specialty in the Zero electric motorcycles though is the Zero S. 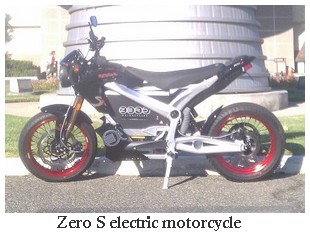 The Zero S is a street bike designed primarily for everyday commuting, but with enough power to carve the canyons and run the track. I have taken both the 2011 model and 2012 models to the track several times and really have a blast doing it. The S like the DS has two size options a ZF9 (9 kwh) and the ZF6 (6kwh), and the ZF6 is upgradable with an additional battery brick to be the same as a ZF9 if you ever wanted to. You will notice it looks similar to the DS, but has a smaller stature and street wheels and tires.

I really love the attention this bike brings when people realize it is not just a toy, but a real bike capable of outperforming their bikes in technical situations and twisty roads.

Is your Zero electric motorcycle quiet?

The ride isn't totally silent, you hear a slight hum like a star wars speeder almost, but other than that the only noise you hear is the wind and nature around you, or city if that's where you're at. It is just so much fun!

Do you miss the noise of a gas-guzzler when you race?

I have never ridden a gas bike, so I don't miss the noise. You'll notice most gas riders wear ear plugs too. I actually don't like how loud the gas bikes are! Sure my bike is quiet, but I find it easier to be more aware and more zen at the same time without all that combustion sound. I do however have an affinity for the smell of the old two strokes, but I know that smell is bad for the environment. I even have an electric lawnmower. 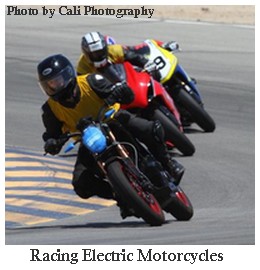 Actually, I loved motorcycles as a kid and always wanted one, but as I grew up I was inundated with how "dangerous" they were and every time I went to get one, I had a group of family and friends convince me otherwise.

I was going to have a heart attack just from my commute if I didn't change that. I hate lines, waiting, and wasting my time, and my commute was all of the above plus filled with other aggravated drivers. The whole commuting in a car experience reminds me of that Ghost Busters movie with the pink slime under the city fueled by New Yorker's negativity.

So I went out and got an electric scooter because it wasn't contributing to the already crazy pollution from commuting, I didn't need a license, nor did I need insurance, but the scooter only went 20mph. I went through 2 electric scooters thinking 20mph would be perfect for me, but stopped in at Hollywood Electrics to look at their selection of electric motorcycles on a regular basis. I finally decided maybe 50 mph would be nice and got my motorcycle permit and my first electric bike from the shop.

That was the real beginning of my love for electric motorcycles. Now I am the first person to get their racing license on an electric motorcycle, my racing partner John Lazear's Zero S ZF9. I am also the first racer to have no gas experience. Next year I hope to set an FIM world record as well. I really have no desire to ride a gas bike now, they are loud and dirty and complicated.

Loud and dirty and complicated? I think I used to date him.

I like being tied directly to the road with only me and my bike joined by the throttle and our movements.

So tell me a little more about the bike. I think I understand the motor, it's a per-mag; but what can you tell me about the battery pack? I'm not familiar with Z-force intelligent power packs. 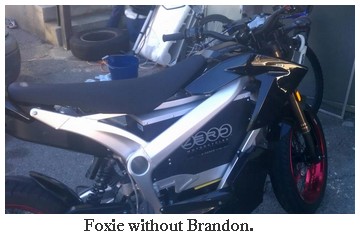 Well, the battery packs are pretty cool from the little I understand them. Zero's head battery guy, Luke Workman, is a really crazy guy that knows how to get every last drop of power out of a battery both safely, and not so safely. He designed the batteries with both power and stability in mind, not to mention the environment, Zero's batteries from what I understand are one of the more environmentally friendly Lithium batteries around.

And they will last up to 300K miles before they drop to 80% capacity - that's just crazy long.

The Zero is really light, holy crow! That's almost incredible. I'll bet it feels like being on a rocket!: ) Can you tell me about your first time riding it, your first impressions?

Well, I have a unique experience with the Zeros as I tweak and modify them with my company DigiNow.it, and Hollywood Electrics, but the bikes are quite impressive from the factory as well. This years model is a little more toned down via software to give a better ride to all levels, even the newcomers. My first ride on a 2010 Zero S was quite surprising, it was far more powerful than my previous Native GPRS bike and did indeed make me feel like a rocket commander, but with some slight software updates and a little help from Hollywood Electrics, the 2012 Zero S really can be a rocket. I'm hoping to be pulling my front wheel off the ground during the racing season.

Have you named your Zero yet? 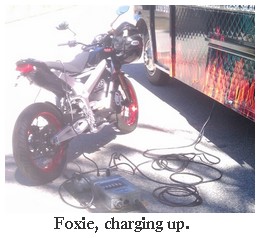 My 2011 Zero S Was named Foxie Cleopatra because she was so sexy, and I will be following the trend with my new bike as the system I developed for the bikes allows them to connect to social media and interact with other vehicles and people. The Foxie project has both a facebook page, and a twitter account.

Ooh, Foxie has her own Facebook page and Twitter! Such a diva. Do people stop you and ask you about her?

All the time! It is pretty cool to see how interested people are, but sad that not more people know these have been available for a while now. I go out of my way to take rides that most people associate with petrol bikes, like Mulholland highway to The Rock Store, or highway 2 up the Angelese Crest to Newcombs Ranch. I really hope that I can help spread more facts about electric bikes to people that are just unaware, or totally misinformed. If we all evangelize our EVs, it is only a matter of time before the whole world knows, like we do, EVs are where it's at.

Have you taken Foxie to any EV shows?

As of yet, no, I have not been to any EV shows. I mostly go to places where EVs are far and few between like Cafe Desmo, as I see myself making a bigger impact in those places, helping spread the EV knowledge.

Thank you, Brandon! (And thank YOU, Foxie!)