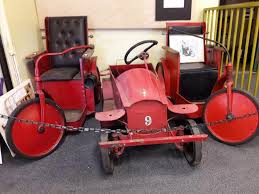 July 12, 2017:  The Historic Electric Vehicle Foundation has recently added six new vehicles of significance to it's Route 66 Electric Vehicle Museum located in the Powerhouse Building on Route 66 in Kingman, Arizona. Two more Custer vehicles were added giving the museum one of the largest Custer displays anywhere in the world according to our HEVF Curator, Larry Fisher. One more Custer from Larry's collection will be coming soon. One is a Custer "Cootie" Car. This tiny EV is the smallest known licensed electric vehicle ever made. The license plate is wider than the body of the car. In the early 1920s these cars could be seen on the streets of New York City and Washington DC. Levitt Luzern Custer, the creator, was good friends with another Dayton Ohio inventor named Orville Wright. Orville and his brother Wilbur shared a passion for flight. Levitt was an avid balloonist. His first patented invention was the Statoscope which determined whether a lighter than air vehicle was ascending or descending.

You can read more about Custer on our web page under Acquisitions and Arrivals, http://www.hevf.org/acquisitions. The other Custer addition was an additional Custer Chair of another period. 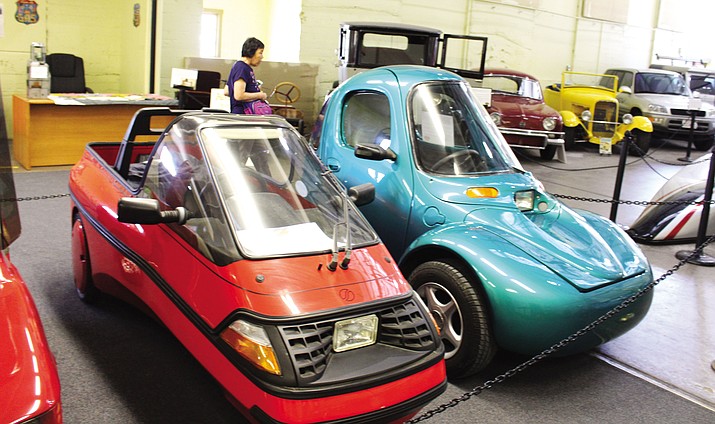 The museum also received a bright red 1993 Danish built City-El donated by Karl Knapp of Palo Alto, California, According to Karl it could be the only surviving all original Danish Eltrans1 A/S City-El in the U.S. City-El are now manufactured in Germany by CityCom GmbH. Another City-El will be coming soon. It is being donated by Sara Yerkes, wife of the late Bill Yerkes who some have referred to as the Henry Ford of Photovoltaics.

Two more U.S. made electric micro cars were also added to the museum from the Larry Fisher collection. The museum now has the largest collection of U.S. manufactured electric micro cars anywhere on the planet. One is white 1954 Autoette. This vehicle was quite popular back in the day. The August 11th 1954 edition of "People Today" stated that Perry Como called it "The greatest thing since sliced bread". For you younger folks out there this was a popular saying back then here in the U.S. Other notable owners of the Autoette brand included Bing Crosby, Bob Hope, Lucille Ball, and her husband Desi Arnez, Groucho Marx, President Dwight Eisenhower. Other owners included band leader Phil Harris, economist Bernard Baruch and millionaire Lawrence Rockefeller. This particular Autoette Cruise About was in the 2012 David Chase movie "Not Fade Away" and also featured with Felicia Day in the 2012 Microsoft X-Box advertisement.

The other micro car addition is 1958 Mobilette (Not the one in the video below, though).

Mobilette was founded originally by Harry Bennison in 1948 and the company was named Bennison Electric Car Sales & Service. The 1956 Mobilette is of significance as it is one of the first to bear the name Mobilette as Harry changed the name of his company in 1956 to Mobilette Sales & Service. This particular Mobilette was also in the David Chase movie as was another acquisition. A 1953 Autoette that was also in the movie was added to the collection but it is not in the museum at the moment as it is in for restoration. It is unique in that it has a wheelchair access door on the right side. Another recent acquisition installed on July 11th is a teal colored 2000 Corbin Sparrow number 32 donated by Yvette Subramanian of Orinda, California. It just crossed Route 66 from "Dream Machines" a custom body and paint shop located conveniently across the street from the museum. It received a glistening fresh coat of of the original teal blue paint due to some minor body damage and scratches.

Our Historic Electric Vehicle Foundation is currently holding a raffle to raise funds for the museum. Earlier this year an electric powered horseless carriage was donated to our foundation. Since it did not fit our criteria to be included in our Route 66 Electric Vehicle Museum collection we decided to raffle it off. It was donated to help our museum and this raffle will certainly accomplish that. The proceeds will go to improving displays in the museum and for restorations of donated vehicles. We are an all volunteer organization with no salaried employees so 100% goes to making the museum a more vibrant and educational experience. The horseless carriage is currently being upgraded to appear similar in style to a 1903 Columbia Electric. We are also putting in a larger motor and modern Lithium Ion batteries. Other refinements include brass period carriage lamps upgraded to LED lighting from the original Kerosene. It will also have new fenders and a period burgundy paint job. Check out our HEVF Facebook page for progress on this project. https://www.facebook.com/HEVForg or go to our web site at www.hevf.org.