The biggest global warming hoax of all is the silly notion that you can rape, pillage, and plunder the Earth forever in the name of PROFIT and never have to pay the consequences. 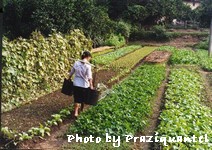 Around the world, most of us women are FARMERS. We have to tend the garden to put food on the table. Maybe not in your neck of the woods, maybe not these days...but maybe your mother or grandmother did. (Mine sure did.)

Our mothers and grandmothers knew, and every gardener knows: you can't just keep taking and taking from the earth without putting anything back. You might get away with it for a while, but sooner or later if you don't feed your soil, your little plot won't provide you any more beans. 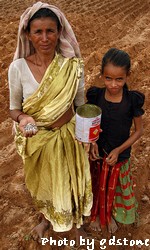 There's no court of appeals, either; it doesn't matter to the dirt if it wasn't economically convenient to replenish the garden this year.

You either learn to give back as a HABIT, by composting your kitchen scraps, chicken... um... byproducts and such, letting the clover take over in spots and turning it under, letting the soil rest...

It's just paying the bills, responsible grown-up human behavior, an INVESTMENT in the future. Something that soulless corporations (and their supporters) would never think to do, because it's not immediately PROFITABLE.


All the invisible work doesn't get done by magic...

There are lots of things we women do, and have done over the centuries, that have made the world go round - even though they didn't really "count" because they weren't profit-oriented...

You know what I'm talking about, because you do it, too - all the work we do after the "real" workday is over. This stuff has to get done, or the home-and-family falls apart...whether or not you can justify the time you spend on it to the shareholders.; )

Same with the planet, isn't it? One big family, one big home.

A few selfish profiteers have been allowed to take and take from the family home...

...and the home is now beginning to show the effects. The bills are coming due, payable immediately.

Somebody's gotta pay, and the corporations (and their supporters) who profit from the environmental degradation don't seem to care who pays, as long as it's not THEM. It's just good BUSINESS to rake off the profits and get somebody else to pay the costs, like our children and grandchildren.

But that's not good business: That's STEALING. And it's NOT okay (just as long as it happens to somebody else) and it's not without consequences (like terrorism, maybe?).

We have to hold the profiteers accountable. The Juliana vs US climate lawsuit intends to do just that.

...there's no such thing as a free lunch!