Ever wonder about electric car history and how the gasmobile ate up the electric car's market here in the US?

The first TRUE electric car might have been a three-wheeled car made in Brighton, England in 1888. Picture a prehistoric Zap Xebra (Xebrohippus?).

Alternatively, the first electric car may have been built fifty years earlier by a Scottish fellow named Thomas Davenport. Depends on who you ask. 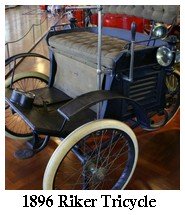 Mr. Davenport's car used non-rechargeable batteries, if you can believe it. No wonder they never caught on! 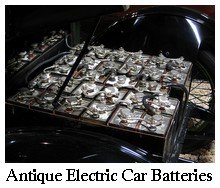 Either way, electric cars came BEFORE gas-powered cars, and the first ones WEREN'T American. America didn't join the electric car party until around the turn of the twentieth century, when New York City got a fleet of electrically-powered taxis.

These cabs were pretty posh, with plenty of headroom for those wacky Victorian fashions (think top hats, ribbons, ostrich feathers) and the driver sat out front like the stagecoach driver in a John Wayne movie.

It made a lot of sense to have electric taxicabs in the city, where you were never too far from a place to power up, and besides, there weren't too many roads in the United States, anyway. That is, not too many paved roads. In 1900, there were 30 thousand miles of roads across the U.S., but only ten percent of them were paved.

People preferred electrics to gasmobiles hands down in those days. They liked electrics so much because they were quiet, quick, and didn't cough smoke...

There were three hundred companies making electric cars in the early 1900's, and more than 30,000 electric vehicles on roads. Electric cars looked like they were here to stay. Baker Electric cars were very popular.

Gas is from Mars, Electricity is from Venus 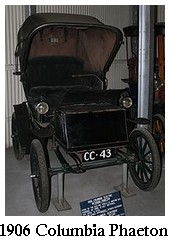 You know what I think really killed the electric car - at least, back in the early part of the 1900's? A marketing error.

You see, when electric cars first went into mass production, they were primarily made for, and marketed to, WOMEN.

One small glitch in this happy, "separate spheres" scene:

Most households only had one car.

...so there goes your market. 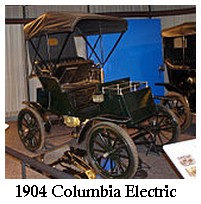 Meanwhile, Henry Call-Me-the-Gas-Man Ford (although Mrs. Ford drove electric, of course) was tinkering around with the gas-powered, internal combustion engine, trying to get on with the business of becoming one of the Big Three. One thing in his favor was that the ELECTRIC STARTER had been invented, which meant the end of getting out there in the mud and hand-cranking away until the engine started. The slogan was, "crank from your SEAT, not from the STREET". (I guess he had Johnnie Cochran writing his advertising copy.) Very catchy!

This meant Mr. Ford could successfully market his GAS-mobile to women, which he did.

...the U.S. was busy building the paved Interstate Highway, which made people want gas-powered cars with their longer range instead of the short-range electrics with their limited, old skool batteries. 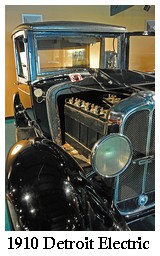 Legend has it that Thomas Edison and Henry Ford met at a dinner party in 1896. Now you'd THINK the outcome of that meeting would be the conversion of Ford to electric, right? But you know what Mr. Lightbulb told Henry Ford?

Now, I prefer to think Edison was trying to steer Henry toward the bar, saying...

Guess we'll never know for sure.

Apparently, Henry took Tom's advice to heart, and the rest is history. The gas-powered, fume-spewing, greenhouse-gas-coughing AUTOMOBILE we all know and love (to hate) went into mass production. 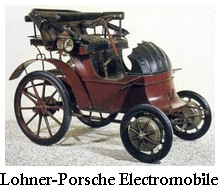 The first electric race car, built in 1899, could go faster than 65 mph. The ROADS weren't capable of that kind of speed at that point in our history, but the electric CARS were.

Speaking of fast cars, and history...

When a fella like Dr. Ferdinand Porsche builds a car, you just KNOW it's gonna be fast.

But did you know the first car he ever built was ELECTRIC? It was pretty darn special for a lot of reasons: It was the first front-wheel-drive vehicle, it had an automatic transmission (thank you, Dr. Porsche), and had four-wheel braking.

And then his second car was a HYBRID.

After that, of course, he joined the Evil Empire...

...but after he built his classic 911, God forgave him and let him into Heaven anyway.

As battery technology got better, and the hacking, choking and wheezing from gas car fumes got worse, GM built a couple of electric Corvairs, but they never really caught on. Why would they? Nobody (much) cared about the hacking, choking and wheezing back in those days. Gas was cheap, and there was a LOT of air up in that sky, most of it still SEE-THROUGH.

The exception was Los Angeles.

Because of its bowl-shaped topography, L.A. holds in smog like nobody's business, and because it's so sprawled out all over the place, you can't live without a car. Some people had two or three, even back then.

Then, in the seventies, interest in electric cars perked up again, with the oil embargoes. I remember sitting in long gas lines with my mom and my little brother, making out Valentine's Day cards for my kindergarten class.

Shows you how old I am, huh?

The granola-and-Birkenstocks folks picked up the call for mass production of a reasonably priced electric car (rather than the expensive prototypes the movie stars could afford), and the "movement" was born.

Actually, the "movement" toward electric cars in the seventies came from besotted owners of these wonderfully zippy, quiet little cars. Once you drive 'em...