"The energy in sunlight striking the earth for 40 minutes is equivalent to global energy consumption for a year. The US is lucky to be endowed with a vast resource; at least 250,000 square miles of land in the Southwest alone are suitable for constructing solar power plants, and that land receives more than 4,500 quadrillion British thermal units (Btu) of solar radiation a year." (Jan 2008 Scientific American, p. 64) 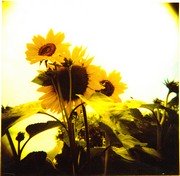 Here in the US, we've got enough power raining down on our heads every day to light up Las Vegas (and everywhere else) for the rest of the year. We've got the technology and resources available right now to collect that energy efficiently enough to thumb our collective nose at oil tyrants around the globe, and bring our carbon emissions to a screeching halt. In other words, we've got free lunch being served right in our back yard, and don't even realize it yet - solar energy.

Scientific American ran an article in Jan. 2008 called A Solar Grand Plan, in which three researchers who study renewable energy looked into exactly how we Americans could get ourselves out of our present energy predicament and climate crisis without breaking the bank. It can be done, they discovered, thanks to the advantages of solar energy...but the biggest obstacle to it actually GETTING done is that the American people don't realize it's possible. 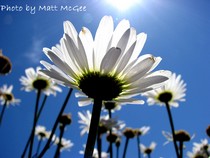 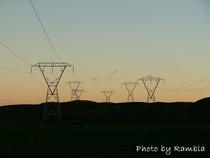 Catch #1: "How much is it going to cost?"
Yes, it costs money to switch infrastructures. A new DC grid connecting the Southwest's solar farms with the rest of the nation, plus solar panel research, development and equipment will cost 450 billion dollars or so over the next 40 years. We've got the money, believe it or not. Compared with things like the farm subsidy program we've been paying for years, or the high-speed communication infrastructure we've been installing...

...and compared with hundreds of trillions of war-dollars being wasted in the Middle East, it's actually pretty cheap.

Catch #2: "Where's the money going to come from?"
The authors of the article propose a 1/2 cent per kwh "carbon tax" over the next 40 years or so...which, if it actually went to pay for a renewable energy infrastructure, we'd probably be happy to cough up. We Americans are so accustomed to being hosed by our public officials for the benefit of megacorporations that we can't even imagine a collective action "for the public good" actually turning out to BENEFIT any members of the public. Look how the farm subsidy program turned out; good for the agribusiness conglomerates, bad for just about everyone else.

So who pays for it? Is it fair for the taxpayers to shoulder the burden? Experience suggests that Americans don't have any problem with taxpayers footing the bill, as long as it's some other taxpayer. Heaven forbid I pay my OWN bills. The ones who scream the loudest about the burden on the taxpayer, I notice, are the ones who pay the smallest proportion of their yearly income to the Fed. But that's another discussion.

Maybe the oil conglomerates should be building this infrastructure with their record profits.

Catch #3: "Solar panels aren't technologically up to the job."
They're real close...thin film solar collectors are at 14% efficiency and rising. Research costs money, and if you're going to invest 450 billion for a solar infrastructure, you might as well kick a few dollars in for research and development. Give it a few years, a few bucks, and it's as good as done.

Catch #4: "Transportation requires fossil fuels. A switch to solar and wind wouldn't change that."
Wrong. Transportation doesn't require fossil fuels. It requires electric cars. The researchers of this Scientific American article were advocating plug-in hybrids, which are good, but we can do better...and already have.

In the 1990s, we had perfectly good electric cars on the road which had quite good range (at least 100 miles) with NiMH batteries, but GM sold the patent rights to Cobasys (a Chevron/Texaco subsidiary) to make these batteries, who then promptly sued Panasonic, makers of Toyota's Rav4 EV NiMH batteries, to prevent them from being used. GM quickly pulled every EV-1 using these excellent batteries off the road, and crushed them. Why? Because after the California Air Resources Board decided not to enforce zero emissions mandates, GM and Chevron reasonably decided that electric cars with good batteries would eat into their profits, which revolve around OIL and gas-guzzlers.

We need to bully Chevron (or pay them, much more probably) to release those patents and allow NiMH EV batteries to be manufactured again, for the public good.
If this is the first you've heard of this wild-eyed conspiracy theory involving Chevron, GM, and electric car batteries, go find a copy of "Who Killed The Electric Car?" at your local video store and catch up. We'll be right here when you get back; )

But the biggest catch?

The American people don't know that something like this "Solar Grand Plan" is even possible. The most difficult part of this plan which capitalizes on the advantages of solar energy is getting the word out to others who don't know this can be done, so we can demand that our government officials stop applying bandaids to the existing energy policy and make a whole new one.

Please talk to everyone you can about this.

Don't worry about the world coming to an end today. It is already tomorrow in Australia.
- Charles Schulz