Can't Hide the Effects of Global Warming
in Alaska! 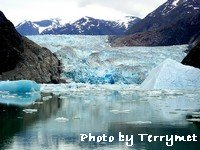 We all know that Alaska is one COLD place most of the year. If you're like me, you're thinking it might even seem like the effects of global warming would improve the situation a bit; )

But it turns out that in Alaska, a degree or two can be the difference between freezing and not-freezing, which makes all the difference in the world.

What happens when Alaska thaws out of season?

The Permafrost Melts Away 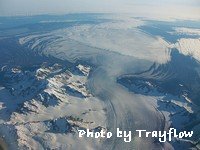 Permafrost is a layer of permanently frozen ground which you find in very cold climates, frozen solid and thick for thousands of years.

Much of Alaska is standing on permafrost, and people have built their homes, roads, schools, light poles, power lines,and buildings on it.

Unfortunately, due to the effects of global warming in the last several years, it's been melting!

When the permafrost melts... 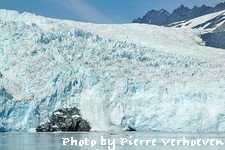 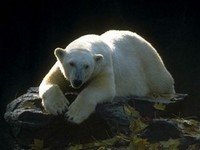 Where the ice meets the ocean, an abundance of wildlife thrive.

In the winter, the ice grows over the Bering Strait and in the spring, it retreats.

There is a thick pad of phytoplankton on the underside of the ice, and as the (freshwater) pack ice melts, the phytoplankton blooms. Animals from all over the world - including mollusks and migrating whales from the South - come to feast on the salad bar.

Polar bears, seals, walruses, and birds use the ice as a floating home where they eat, have their babies, and rest.

25-30 years of satellite data have shown the effects of global warming: every year, the area consisting of pack ice is getting smaller. And the rate of loss is sharply increasing.

Sonar data from Navy submarines shows that the pack ice is also getting thinner, decreasing 42% between 1950 and 2000.

We Lose The Glaciers 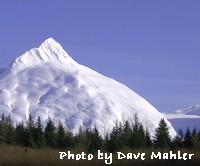 When the glaciers begin to downsize because it's not as cold year 'round as it used to be... bad things happen: 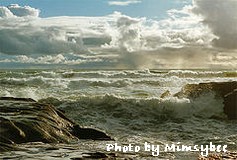 ...and it makes the salty ocean water less salty by diluting it with fresh water. What happens when you put an ocean fish into fresh water? It swells up with water and dies.

Salmon are the exception -- an unusual fish adapted to both salty and freshwater environments. But not at the same time!

The native elders in Alaska say that some of the effects of global warming in their region is that the salmon have more warm-water parasites than they've ever had, and that they're behaving strangely. In Southern Alaska, they're already reporting salmon kills because the temperature of the water is rapidly increasing, and the salmon cannot adapt quickly enough.

The Inuit elders are reporting that more and more drowning accidents are occurring during hunting season, as the edge ice gets thinner and the waves get bigger - another of the effects of global warming.

Much larger waves are making it more dangerous to go out to the whales in native boats.

The sea ice is less reliable, and there is increased danger of ice -- the chunk of ice the hunter is standing on -- breaking off and floating out to sea. They say it is difficult to find a raft of ice thick and heavy enough to haul up a whale carcass.

Charles Wohlforth, in his excellent book of global warming research in Alaska called "The Whale and the Supercomputer", reports observations made by the indigenous people of the Arctic on climate change. "They say the earth is faster now," he comments. "they say that the weather systems move through faster, are less predictable, and more violent." 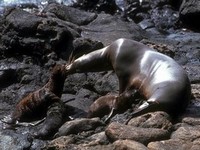 I know, I know - for a lot of us, Alaska is a long ways from home. The pictures are incredible, but, well...so what if it warms up a little?? 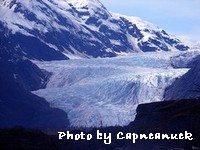 Albedo is the name for what happens when the sun's light and heat is reflected from a colored surface; to illustrate, take a glacier as an example. It is white, and reflects back most of the sun's heat into space, and consequently is called a high-albedo surface. The polar ice sheets are also high-albedo.

The blue ocean, green plants, and brown dirt, however, reflect back very little of the sun's heat -- and are called "low-albedo" surfaces.

...and a very large global heat sink disappears -- which is the only thing that is keeping the earth's atmosphere in the range that our fragile, temperature-sensitive human bodies can tolerate.

Without polar ice, we might as well be living on VENUS. The planet cannot afford to lose those big chunks of ice at the poles.

So what can we do? Three things:

Thank you to Chad Kister, author of Arctic Melting, whose research provided lots of the information you just read. He's a guy whose heart is really in Alaska; he likes to hike in the wild places of Alaska like the Wildlife Refuge, and he's talked to people on his travels that live in or near the wild places.