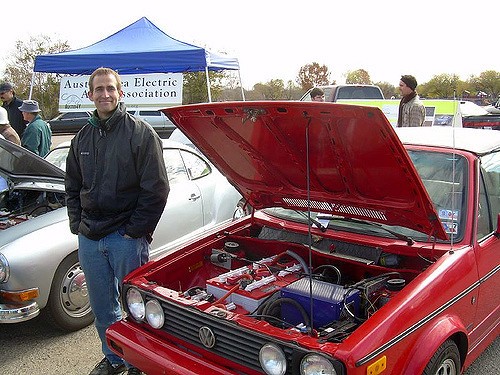 If you're just starting your electric vehicle conversion journey, you might be saying to yourself: “You know what I need? Some videos!”

I agree. There's nothing more helpful than watching somebody else, preferably somebody who has done a few conversions, walk you through the process and anticipate your questions.

Also: what's up with all that cheesy music?

Don't worry – as usual, friends, I got your back.

I went to YouTube to find us some FREE videos (a very good price, as the saying goes) that are QUITE suitable, and I've brought my favorites back for you.

I actually like the cheesy music, though, so no help there.

Back when Ben Nelson first starting thinking about electric cars, the only one that he'd heard about was the Tesla Roadster and that was way out of his price range – right? Like 100k –  and so he said to himself “I think I'll build one!”

When he was done with his electric vehicle conversion, he made a video because nobody else had done it and he thought you might like to see how he did it, and he charged a little for it, just to cover the costs of production.

Fast forward to now.  Ben has now put his videos on YouTube for anyone to access for free.  He says the technology has boomed, lithium batteries have gotten cheaper and more readily available, and you might find this video series to be outdated.

You may agree.  But I say: some things have NOT changed, and they never will.

Well, the stuff you can salvage has gotten better since 2008.  You're not limited to digging through the forklift salvage and buying golf cart batteries on Ebay, because since then people have wrecked their Nissan LEAFs and their Tesla S's and there are electric powertrains and lithium battery packs available that are already designed for electric cars, and you can get THAT stuff on Ebay or wherever now too.  You could potentially have a much more interesting electric vehicle conversion than we used to be able to do back in the day.

What has NOT changed?

Well, the big picture is never going to change; the basic need-to-knows of converting a gas-gobbler to electric are pretty much universal.  And electric vehicle components are pretty simple, too.

It's not just that the big picture of CAR conversion doesn't change; it's also that car conversion knowledge will help you convert any gas gobbling form of transportation to electric.  So if you watch somebody build an electric car, and if you are wanting to build yourself an electric boat or a plane instead? No worries. You can use the same principles, the same equipment, and the same information to convert ANYTHING to electric.

Most vehicles have more in common than not. Once you've learned how to convert a car, you can take that information and translate it into just about anything!

Ben has not only produced this well-made series on how to build your own electric car, but he has also produced an excellent video series on how to convert an electric motorcycle, and in another - my favorite! - he talks about his solar panels and how he gets NEGATIVE NUMBER electricity bills when the solar panels on his roof produce more juice than he uses.

Yes, that's right...the electric company pays HIM at the end of the month.

If you want to see how that magic is done, you'll want to read Ben's blog, 300 mpg, subscribe to Ben's YouTube channel, and check it out for yourself.

How to Convert to Electric Series – EV4U Custom Conversions

This is an excellent series from an electric vehicle conversion shop called EV4U in Shasta Lake, CA.

The proprietor is Richard van Wyhe, and he walks us through the conversion of a beautiful '74 Karmann Ghia.  He uses GBS batteries (LiFePO4), a Curtis 1231 controller, the Impulse 9 DC motor, at a total cost of about $24,000.

In his video, he talks about desirable donor car attributes, such as...

The best part of this series are all the options.

I don't know about you, but I found this electric vehicle conversion video completely charming.

This (Russian?) guy goes through his conversion process in reasonable detail but the video is less than a half hour, so you can get a good idea of what all the fuss is about without investing a lot of time.

At the end of the video, he smokes his tires a little. Yeah, us too: )

Why I Overpaid For This Tesla Sewage Mess – Rich Rebuilds

If you're a Tesla fanboy (or girl, etc.) and you haven't seen Rich Rebuilds yet, you're going to want to subscribe to his YouTube channel and check it out.

He finds beautiful, broken and battered Teslas at auction, buys them, figures out how to make them go – and falls in love (and frustration) all over again as the process unfolds.

He's obviously lost his mind, and we approve. We applaud. We relate. That's love.

I mean, you don't really know what your beloved is made of until she's been through hell, right?  All of this man's Teslas have been through hell, but no matter what fresh hell he encounters with each new car auction, he brings them home, names them, discovers all their secrets, makes them whole again, gets them back on the road again (hopefully), and then moves on to the next damsel in distress.

Rich Rebuilds has made a series of short videos documenting his Tesla rebuild adventures. He pulls swamped and corroded motors, battery packs, controllers, and interiors from Teslas that otherwise were headed for the scrap heap, and brings them back to life. It made me wonder: what other fantastic things could be built with Tesla salvage? Watch, and get your own ideas.


If you find another series on YouTube or elsewhere that deserves to be here, too - drop me an email.