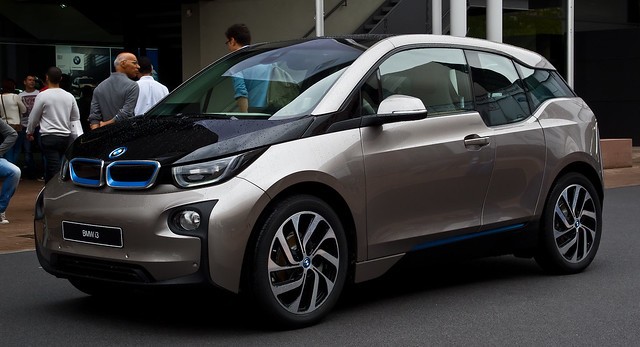 The BMW electric car is called the i3, and wow, it is really a head-turner! The lines of it remind me of the LEAF, but the size is actually sub-compact. (I saw one of these at the Safeway near my house the other day. It's taller and smaller than I expected.)

There are multiple versions of the i3:

The official BMW website says it goes 0-60 in 7.2 seconds (it's since been brought down to 6 point something seconds). Maybe the BMW electric car is not Tesla-esque, but a little quicker than the LEAF, and certainly quick enough for me!

The BMW electric car (i3) has three different options for charging: the usual 3-prong 110v outlet (level 1), or there's a 7.4 kw level 2 charging capability (or less, depending on whatever your local charging station is capable of delivering), or the SAE combo level 3 charging.

The motor is sort of a technological marvel. If you're interested in learning more about it, there's a rather long video you can watch like I did (above). Oakridge Labs bought one of these cars a few years ago and took the motor apart and the presenter gives a lot of details on it in almost 2 hours.

I really recommend watching the video if you have the time. It talks specifically about the BMW motor, but there's also a lot of information about all of the newest generation of electric vehicle motors. There's everything you ever wanted to know about induction motors and permanent magnet motors and their manufacture and control.

Is a BMW supposed to have a PLASTIC body??

Well, carbon fiber reinforced plastic, anyway. I guess it works, and I'm sure it lightens things up considerably, but... I don't know. Let's just say magnets are not going to stick to it! (What? You weren't considering all the EV parades and "drive electric" week decorations when you bought your electric car? Well, me neither. But my 2013 LEAF is fully magnetic nonetheless: )

The carbon fiber body is something like a boat hull, I've heard people say.

While we're on the subject of the body...how about those rear doors?

The BMW i3 - any version - has regular 2-door styling and then there are rear doors leading to the back seats but the doors are rear-hinged and there don't appear to be any external handles. Good idea? (Yes! I can see that it would make it easier to get into the back seat.)

The batteries are modular and under the floor (where they belong). The motor is between the rear wheels (it's RWD, which is not my favorite configuration, but whatever) and the range extender generator - if you have the REx version - sits right next to the motor.