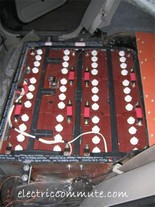 You'll be connecting batteries in series for your electric car conver. But how is this done, exactly? If you don't know your series from your parallel, don't worry. Come on in.

Connecting batteries in series is like solving a math problem: Batteries come in 6, 8, or 12 volt packages (The lead acid golf cart batteries do. Lithium batteries come in different voltage packages, but the principle is still the same). Your car's system is 120 volts (or whatever). So how do you get from, say, 6 volt batteries to a 120 volt car?

Simple.To add voltage, wire your batteries in a series configuration. 120 divided by 6...that'll be 20 batteries. Right?

But what does that mean?

You'll have your batteries sitting in a battery box. You might have more than one battery box in your car in order to distribute the weight evenly - doesn't matter for purposes of connecting batteries in series.

Start at one end of the batteries... 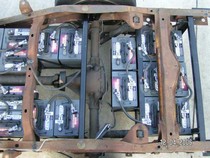 When you get to the end, you'll have a positive post left over at the twentieth battery, and a negative post at the first. They will be attached to the load.

If you're connecting batteries in series, it is important to make sure that each battery has the same capacity - meaning, the same number of amp-hours (AH). If some of your batteries have 180 AH, and others 220 AH, the batteries in the series with fewer amp hours will discharge too deeply, shortening their life. (Dramatically.)

But what if I need more amp-hours?

Suppose you had a battery with 6 volts, but only 10 amp-hours? Could you wire several of them together to give you more running time?

Yes, actually, you can.

If you're connecting batteries in parallel, it is important to make sure that each of the batteries in the configuration has the same voltage.


Connecting batteries in series AND parallel? Both?? 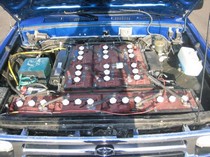 Yeah. But most of the time this won't be necessary. Why? Because you can just purchase your batteries with the right number of amp hours, then connect the batteries in series. I suppose you could wire the parallel units together first, then connect those groups into a series...and people do this, especially with small lithium ion batteries...but personally, if I could avoid it, I would. More connections means more places that can wiggle loose as you drive and require maintenance.

One more thing about those connectors...

You'll need connectors that have thick enough wire to carry the necessary amount of current, or they'll heat up.

Back to Electric Car Batteries
More on wiring batteries in series...
Electric Cars are for Girls Homepage | Privacy |Contact |About Me