You've probably heard that all the new electric car batteries coming out in the cars from the major automakers are lithium ion batteries, right? So you might ask, what's the difference between lithium ion and, say, lithium iron phosphate (LiFePO4)? 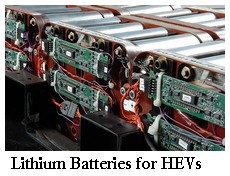 Lithium iron phosphate (LiFePO4) is a slightly tamer form of lithium ion battery than you find in your laptop, but it will still take you 100 miles on a single charge.

So I got a chance to talk with Mike Collier at Lithium Storage about lithium electric car batteries. He sells prismatic LiFePO4 battery packs for EV conversions, and I've found him to be quite knowledgeable about lithium electric car batteries in general. I also spoke with Jack Rickard from EVTV, who has done several AC electric car conversions using different brands of LiFePO4 cells, and he's put the LiFePO4 cells in both AC and DC systems. 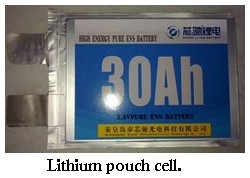 Pouch cells have the benefit of being thin and easy to build into large "proprietary packs". And some have a bit higher energy density. But these pouch cells are more expensive and require greater attention to temperature.

Pouch batteries also expand when they are charged and discharged, so they have to be contained. 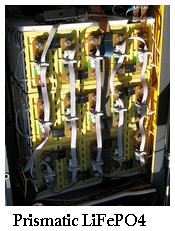 For electric car conversions there's just nothing better than the LiFePO4 electric car batteries right now, and the most readily available ones are the Chinese prismatic cells. 100 miles on a charge is NORMAL with these. The price is reasonable. They're safe and reliable. And they're available to ship anywhere here in the US.

Conversation with Mike at Lithium Storage

Lynne: I see that the Chinese prismatic cells are identifiable by their colors, like sweetener packets at the coffee bar! Yellow? Blue? (Pink, anyone?) Does each company stick with just one color?

Mike: The color thing is complicated. Here we go:

And yeah, I'm sure I could get you pink batteries if you wanted.

What would you say are the major distinctions with each type? Seriously, they all seem about the same to me. I can't make heads or tails out of the subtleties of the graph curves. 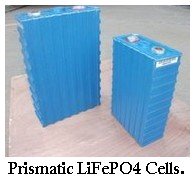 Is there a difference? Well, Skyenergy, GBS and Sinopoly were among the many manufacturing partners under old Thundersky. So the appearance, construction and chemistry were nearly identical. These three have all branched out on their own and now things are slightly different. I'm not familiar enough with GBS to make any claims regarding their chemistry, but the case design has changed to incorporate a neat cap and awkward busbar system.

Skyenergy is now CALB. Their cells can be found in identical sizes to Thundersky, but colored blue. Inside, the CALB cell has a slightly different voltage range, a higher C rating and lower failure rate. Sinopoly cells match the old Thundersky, but new cells are a bit smaller in physical size.

I should note that Thundersky still offers cells, but the data sheets indicate a higher top voltage than I'm comfortable with and the charge cycle life is falsely stated.

And now back to Jack Rickard from EVTV:

Jack: We use Thundersky (yellow) or CALB (blue) batteries somewhat indiscriminately. Both are excellent LiFePo4 cells. We've had great luck with them. In the case of the Mini Cooper Clubman, we use smaller 100Ah cells and 112 of them to get that 375 volts. In the lower voltage cars, we use LARGER cells of 180 Ah.

Lynne: So they both work fine, they cost about the same, it's mostly a matter of what fits in your available space and battery boxes, right?

Jack: You got it. 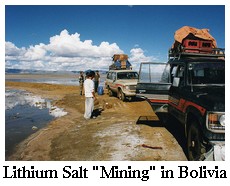 What's Not So Good About Lithium Electric Car Batteries?

Mike told me a little about how to tell a reputable LiFePO4 EV battery distributor from...the other kind.

Mike and I talked a little about battery management systems and the need - or lack of it - for management. Turns out I was all wrong about WHY lithium batteries need to be managed.

Mike: Thermal runaway is not much of an issue for the Chinese Prismatic or cylindrical cells.

The reasons for management are warranty validation, and to keep the cells within the required optimum voltage range. The BMS (Battery Management System) serves primarily to monitor cells and send alerts (this could be via screen or buzzer or dash light or relay power cutoff, etc.). Think of it as cheap insurance for the expensive battery pack. Otherwise cell/s could overcharge and suffer reduced life over discharge and prematurely fail.

Some folks are just fine without a BMS. But you have to religiously monitor the pack.

But lithium is sensitive to heat and cold, right?

Actually, lead batteries are far more sensitive to temperature than lithium, though lithium cells don't like to charge below 32 deg F. - the lithium just plates the other side and reduces the life of the cell.

Get LiFePO4 Batteries For Your Electric Car

If you'd like a set of LiFePO4 electric car batteries, you can reach Mike here at the Lithium Storage website.