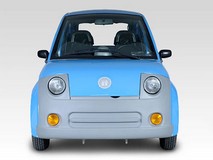 One thing you can say about the IT electric cars: they look like little normal cars.

Okay, okay, don't get me wrong: I love the far-out, groovy looks of the three-wheeled city cars...

...but honestly, isn't it nice to have a car that's kind of, well, familiar??

I know, that's not really what makes the IT electric cars so outstanding. These have lots of nifty features, which I'll get to in a minute... But look at them! Aren't they just CUTE, in a grown-up way? I mean, they look like a serious car. 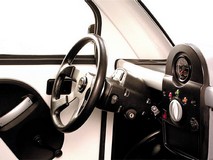 Normal Car Stuff. You get used to seeing stuff like self-cancelling turn signals and windshield wipers with a reservoir of washer fluid in a regular GAS-burner, but it's sure nice to have this stuff come standard in an electric car. In the little NEVs this is not always the case, because the manufacturers are often trying to save money and weight and these things are not always required in a car that only goes 25 mph (or 35 mph in the LSV states and provinces).

The IT has regular seat belts, front-wheel drive, normal brakes, normal tires. The dash is actually optional (really?), but the state-of-charge meter is front and center!

The IT comes with speedometer and odometer, standard features I personally couldn't live without, though again not all NEVs have these. It's not like you're gonna get tickets in a car that maxes out at 25mph, but the odometer is useful.

These little guys have a back up alarm? Yeah. This is pretty nice, especially on the van. I wish these were standard on the fire-breathing SUV's, don't you?

Now for the optional stuff. The older models of these IT electric cars have DC motors as standard equipment, but your IT can be an AC electric car if you want. An AC drive system means better acceleration, better use of the original batteries and a burst of power for climbing hills.

Speaking of AC...you can get air conditioning, too.

IT electric cars in the wild 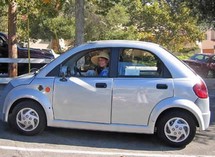 People stop IT owners on the street to tell them they LOVE the car, and demand to know where they can get one. I know this is true, because one of those IT owners delivers the mail in my mom's little town in Washington State, and the mail is frequently late from all the ATTENTION the car grabs.

So if you HATE attention...

...don't get one of these. Fair warning: You'll be mobbed.