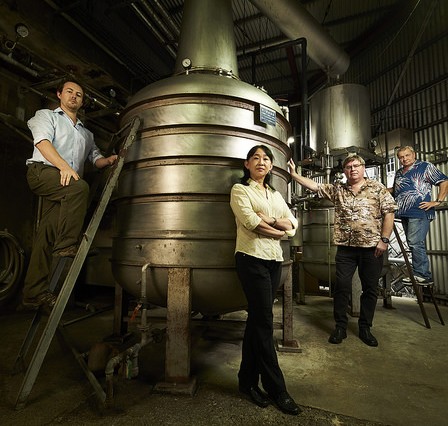 There are several different types of fuel cells...

What they have in common is the proton (H+) driving electrical energy.

The different kinds of fuel cells are are used for various jobs, from powering cell phones to generating electricity for power grids. Some operate at high temperature, some at lower temperatures; some types use pure hydrogen gas as fuel, others use methanol or diesel or other hydrocarbons.

Come on in and see what the different fuel cells can do.

Why is it called a “fuel cell”, though? Who knows.

The word FUEL itself, which dictionary.com describes as “material such as coal, gas, or oil that is burned to produce heat or power” would seem to imply “internal combustion”, right?

In a fuel cell no burning is ever involved. Fuel cell technology uses oxidation of fuel, not combustion.

The kind of fuel cell technology that is used in a car is called the PEM fuel cell, with PEM meaning Proton Exchange Membrane.

Some features of this type of fuel cell are:

PEM Fuel Cell: How it Works


Air on one side, a mix of oxygen and nitrogen gas, with hydrogen gas on the other (that's what they're calling 'dihydrogen' in the video); platinum cracks the hydrogen gas apart into two protons, which are collected and rounded up to do some electrical work. That electrical work is either powering an electric motor to run the car, or recharging the car's battery pack.

The Role of Carbonate Fuel Cells in Carbon Capture and Storage

For more information, an easy to read chart comparing various types of fuel cells and their pros and cons can be found here at the US Energy Department website.

So to summarize the types of fuel cells...

There are several types of fuel cells in use today, and we've touched on just a few here. Some of them are used in fuel cell cars, some in huge applications like megawatt energy production; others are small enough to fit in your pocket and are recharged with droppers full of methanol.