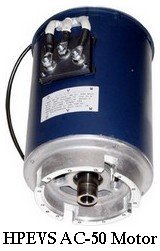 Jeff from Ohio wrote me the other day, "What, if any, are the advantages of AC electric car motors over DC motors?"

There's a debate worthy of a page of its own!

Metric Mind, a well-respected supplier of AC electric car motors drive systems for electric cars, says that for general drivability, the AC system is far superior to the DC system. They say your first clue that this is true is that when the major automakers - GM, Ford, Toyota - made an electric car, they ALL went with AC electric car motors. This is probably not a coincidence; )

These are the advantages of AC electric car motors that Metric Mind discusses on its website's FAQ, paraphrased liberally: 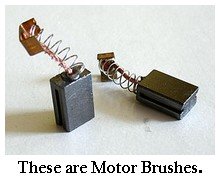 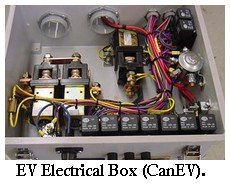 Then on the low voltage side...

Typically, no harness exists or is included; you come up with your own." 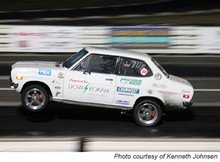 The first is the EV drag racer who wants to blow the doors off the ICE machine sitting next to him (or her), and won't be going more than a quarter-mile at a time...

...he'll probably prefer a DC motor. (The very quick Wrightspeed X-1 has an AC drive system from AC Propulsion, but most drag racers use DC motors.)

And the other is the "quick and dirty" hobbyist converter who just needs to get something running on batteries as cheaply as possible. There's no shame in this, a lot of the EVs on the road today belong to this guy.

I'm just saying there's something better out there, and the electric cars of the future will doubtless have 3-phase AC electric car motors. Eventually, we electric car enthusiasts will have take a deep breath and conquer our fear of the unknown. We'll be better off in the long run.

Come on in; the water's fine!