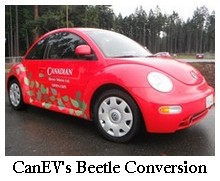 Canadian Electric Vehicles is a conversion shop in Errington BC owned by a really nice guy named Randy Holmquist. Randy's gotten a reputation as one of the best EV converters in the business.

Here's what you can get from Canadian Electric Vehicles:

Or, Canadian Electric Vehicles can send you parts and help for non-standard electric vehicles.  For example, if you're building...

Randy also builds the might-E-truck NEV, electric refueling trucks for airports, and when I talked to him on the phone the other day, he told me he ships electric car conversion kits from Canadian Electric Vehicles all around the world.

So I talked with Randy about his conversion shop, and what the process of getting your gas-guzzler converted to electric might entail. Most pressing question, of course, was whether or not I could get an electric car I didn't have to SHIFT. (Almost never, he says.) 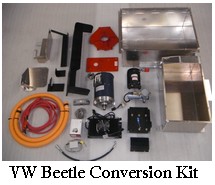 Lynne: Hi, Randy. Let's say I want a conversion done at Canadian Electric Vehicles. Shall I bring you a car, or do you just have gas-gobblers laying around the shop you can convert for me?

Randy: It's strictly bring-your-own-donor around here.

If I bring you a car with a working engine to be converted, will you sell it for me and deduct the cost from the conversion?

Well, sure, I can try. Keep in mind, though, that I have still have two Neon motors, an Echo motor, and a Dodge Dakota motor sitting here.

What kinds of cars does CanEV convert? 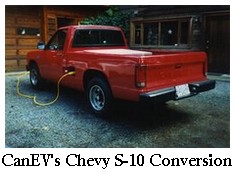 Will you convert any car, or are there just certain types of cars that can be converted? Can you convert a mini-van or SUV?

Well, we prefer the S-10 truck and the Dodge Neon, although we've found we can also do the Toyota Echo and Yaris. The engineering cost to do something other than those is about $12K extra.

Is it possible to get an electric car that can run on the freeway and has a 100 mile range for under ten thousand US dollars?

Even our S-10 kit is about $10K us and does not include the batteries.

What's your favorite conversion to do?

The S-10, probably. That kit is the most popular. 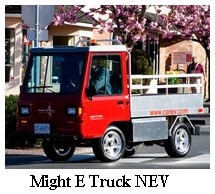 I heard a rumor that you're doing AC conversions with the HPEVS AC-50 motor and lithium batteries. True?

You heard right. I'm using that in the light conversions now if people want that.

Just not at freeway speeds.

Not at freeway speeds, correct. It goes 25 mph.

What kinds of financing are available?

Randy: You'd have to ask your bank about that. I don't do loans, either.

I've heard everybody say I should bring in a manual transmission for conversion, but I hate them. Do I have to?

No. I'll convert an automatic for you. But think about this for a second: An S-10 with a stick gets about 40-50 miles, while the same truck (we have swapped a stick into a converted automatic to see the difference) with an automatic will only get 25 - 35 miles. 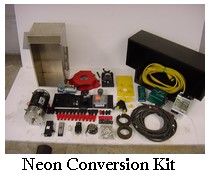 Randy: Yeah. But if you bring me a manual transmission car to convert, you can drive it in second gear around town and never use the clutch.

Randy: Well, you shift up on the freeway. Almost never. It will be practically painless.

Do you have a waiting list? How long will it take from the time I bring in my car until I can drive it home?

We usually have a 3-4 month wait in the spring and summer and then it drops off in the winter. No slowdown this year at all, though.

Further reading: Check out Randy's interview with the Vancouver Sun in which he tells the reporter that selling cars is all about power and SEX, his point being that his electric S-10 conversion is probably not a chick magnet. But ya never know; )