Global Warming Myth:
There's Nothing I Can Do!

The most dangerous global warming myth of all is that there's nothing I can do. Evil flourishes - scientists for sale, corporations for dirty profits, officials for personal gain - when good people stand by and do nothing.

So Is Global Warming Real, or What?

The question "Is global warming REAL?" seems to me to be essentially a puzzle of politics and money centered around these FOUR questions...

...and four problems getting in the way of answers.

1. Forecasting the weather is still a pretty tricky business. 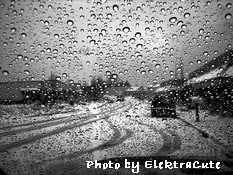 The first problem is that climate modeling, like weather forecasting, seems like a very inexact science with a lot of room for error.

We're all pretty familiar with climate modeling, thanks to our local weather-shaman on the evening news. He or she stands in front of a picture of your town and points to doppler radar graphics (yes, thank you, we can look out the window and SEE it's raining already!) and satellite photographs of systems moving in from the coast, and pretty soon if you keep watching there's a five-day forecast, which around my Northwest neighborhood is frequently wrong.

Doesn't give you a lot of confidence in climate modeling, you say? Sure. Understandable.

Long-term global climate modeling is apparently not so different from the local weather forecast: the computer uses a mathematical formula containing several known factors as a function of time in order to predict the future. Probably.

There are, however, some important differences: The local forecast is only good for a week or two. After 14 days, what the weather's going to do in a particular place is anybody's guess. That's not the case for a whole planet, where there's more stability over time.

A big place (the whole planet) is much more stable and predictable than a small one (your neighborhood): just ask anybody with a fish tank, right? Big tanks are easy to maintain, because they don't react so much to changes. The little fish tanks require a lot of fiddling.

Our planet has a lot of stability...

...so it's been tempting to think it can take care of itself, no matter what we do to it. It's also been convenient (..for some. Not you and me, of course!) to think that we have NO IDEA what planetary weather might be in the future because we can't even accurately predict whether or not it will RAIN next Tuesday. 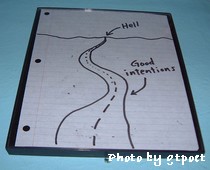 Convenient, because if they can convince us and themselves that global warming isn't real, it allows them to continue with their rape, pillage, and plunder of the Earth for profit, while claiming only good, skeptical science and above all...good intentions!

Now, let's see if I remember right: which road is paved with THOSE?

2. Climate Change can be Procrastinated. 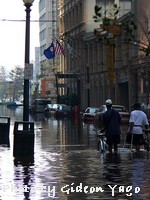 The second problem we face is that when it comes to climate, urgency is not emergency; so for politicians it becomes a question of priorities. Why do today what you can put off 'til tomorrow?

This big ole planet doesn't show effects of our past mistakes right away...

...so let's wait to change our habits until really BAD things happen.

(Bad enough? Losing the Big Easy to nasty old Katrina, even temporarily, was bad enough for me.)

The third problem is the intersection of money, science, and politics. Scientists, as we are all becoming increasingly aware, are sometimes available for rent, lease, or sale.

I know just the thought of this makes us feel all squirmy, because we'd like to think of the halls of academia as a hallowed sanctuary that the love of money cannot taint, but unfortunately, we've had to grow up and know better. I hate this as much as you. But like you, I've had to accept the evidence:

If you can get a bunch of scientists to say that smoking cigarettes is practically GOOD FOR YOU, there's probably no science that's not vulnerable to vested interests.


4. Pass me the bottle and bring on the Apocalypse.

The fourth problem is hopelessness.

This attitude is the most dangerous of all, in my opinion, because it leads otherwise good people to PARALYSIS.

And it leads the greedy to continue their pillaging and plundering, because after all, the world is going to explode anyway - might as well take all we can in the meantime.

I believe can all do SOMETHING. Even something as simple as planting a tree or NOT supporting a slash-and-burn corporation (when you have the choice) can make a huge difference. Or, you can drive an electric car and put solar panels on your roof!