The Might-E Truck is a mid-sized electric work truck built by Canadian Electric Vehicles. It meets all the usual standards of NEVs, the top speed is 25 mph, and it can do all the handy little jobs that a small truck can do - but with the advantage of being environmentally responsible and having much lower regular maintenance costs.

I recently got a chance to speak with Randy Holmquist about his Might-E truck NEVs. These light NEVs are being used as service trucks, garbage trucks, even oil spill recovery (how ironic; ). There's also a 3-ton Might-E truck available which is now being used in airports. 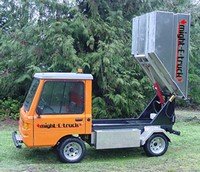 Is the Might-E Truck street legal? The brochure says it meets the regulations for an NEV, so I'm thinking that means "yes". Can you talk a little about that?

Yes, it's street legal. Actually, we were street legal in the United States a couple of years before we were in Canada due to slow Canadian regulation changes.

I went to the NHTSA website to refresh my memory about what's street legal in terms of NEVs in the United States. It means: 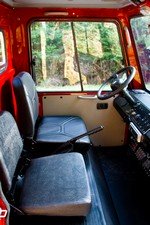 I understand the HPEVS AC motor is available as an upgrade. What motor does it come with standard?

The HPEVS AC motor is standard. We started to offer the HPEV AC12 system as the stock motor in 2011. The AC35 is the optional upgrade.

So you don't use DC motors in these at all.

No, we would never go back to DC.

How much to upgrade to lithium batteries? 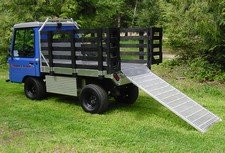 I saw in the brochure that the Might-E Truck was built specifically to be low-maintenance. Can you talk a little bit about that?

Unlike most NEV's, the Might-E Truck Jr. is not a conversion. We don't import a truck from an offshore supplier and then convert it. We build it from the frame up using mostly North American auto parts, so things like brake pads are available at any auto parts store. Since we build the whole truck here in BC we always have ANY replacement part a customer may need in stock.

As the truck is assembled its sprayed three times with an automotive wax based rust proofing to reduce corrosion which extends the trucks service life.

The main electronics are housed in a side compartment which is easy to access so no hidden or hard-to-get-to parts. Since they are inside a compartment they don't get wet or covered in winter road salt. All these little points reduce the chance of a failure. 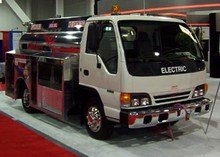 The big airport truck, is that built from the ground up, or is that a conversion?

Our big three ton airport trucks are actually a conversion of an Isuzu NPR truck and not built from the ground up by us.

There again, though, the replacement parts would be widely available.

You have some of them you've sold that have been in service quite a while now, with some very happy customers. Can you give me an idea of what kind of money a city or a school or an organization can save with a vehicle like this replacing a gas vehicle?

When replacing a small truck like the Ford Ranger the operator can see a couple of thousand dollars per year in fuel savings as well as the carbon offset of the EV.

What are these Might-E Trucks being used for?

Everything from an electricians service truck on a BC island to garbage trucks in small communities, even an oil spill recovery truck. Universities mostly have the van body or service bodies and use them for trades people.

What other applications can you imagine these being used for?

We have two as airport service trucks and I think there is more airport applications that we need to explore.

Our larger 3 ton trucks are used at airports in 6 countries and I would like to see the same sort of world domination with the Might-E Trucks; )

So, to be clear, we've been talking about the Might-E Truck Jr., but you've got a big Might-E truck as well. Thank you, Randy!

For more information, including how to contact Randy about a Might-E Truck, you can read Canadian Electric Vehicles FAQ here.