This Miles electric car is the relatively new kid on the NEV block.

Of course, being the new girl around here myself, I'd never hold THAT against them, would I? 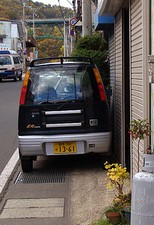 There are now at least two Miles electric cars for sale, including an off-road version (it's the same car, seems to me...but it goes faster, so if you've got a huge sprawling ranch or just want to drive it on campus or whatever, here's your car). There's a little truck, too - with similar specs.

So here are the essentials on the Miles zx40 NEV:

I drove the ZX40 street legal version in Seattle, and it's a very nice NEV. Nothing flimsy about it at all.

The ZX40 is a quite cute little neighborhood car, and probably will be stiff competition for the ZENN! It's about the same price, maybe a little less at 19k plus shipping, and Miles is claiming a range of 40 to 50 miles. Maximum speed, of course, is 25mph in most places by law unless you live in a state that has medium speed vehicle laws, raising your speed limit to 35 mph.

This isn't me in the video here, but this is the same dealership I visited:


When I test-drove the Miles in 2007, the ZX40S was a little more expensive, a bit quicker on the acceleration, a bit longer on the range, and a bit more bullish on hilly terrain than the ZENN because of the AC motor (it was an upgrade on the ZENN, while the AC came from the factory in the Miles). After 2008, the ZENN also got the HPEVS AC motor and the hill performance was great in both cars.

Update: Neither the ZENN nor the Miles are in production as of 2011. You can still find them around, there are some left at dealers, Craigslist and Ebay.

My Thoughts on the Miles

The Miles electric car is imported from China, but based on the Japanese Kei car, Daihatsu's "Move".

Small rant about Kei cars and the US...

Kei cars, according to Wikipedia, are mini-cars from Japan produced to take advantage of favored tax and insurance status.

Gee, the Japanese government apparently made LAWS promoting (or at least not discouraging!) the use of small, fuel-efficient cars. Go figure. I was amazed to discover that Japanese companies have been mass-producing these tiny little (extremely) fuel-efficient cars for years, but they're not available in the United States.

Why not? You might ask. Oh, because there's no market. Americans don't want tiny little cars.

Or, possibly, because the auto/oil lobbyists and their corrupt lawmaker buddies wouldn't allow us the choice.

The Miles ZX40 electric car looks like a real car because it IS a real car. And Miles Automotive has gotten a certain amount of media MILE-age (sorry, bad pun alert) out of the crash-testing and safety rating associated with that.

When the Daihatsu "Move" was exported to China, they renamed it the Happy Messenger. Isn't that sweet? Why don't we call cars something friendly like that, instead of some obscure combination of scrabble-letters and numbers, some city name like "sebring" or "tacoma", or some version of "predator"?

Me, personally, I want a car that's:

So anyway, the Miles electric car is a Daihatsu underneath, albeit one that's been modified to run on electricity. Now, even though they don't electrify these anymore, all the spare parts you might need to replace eventually are mass-produced and readily available.

These are cool. I'd definitely drive one!